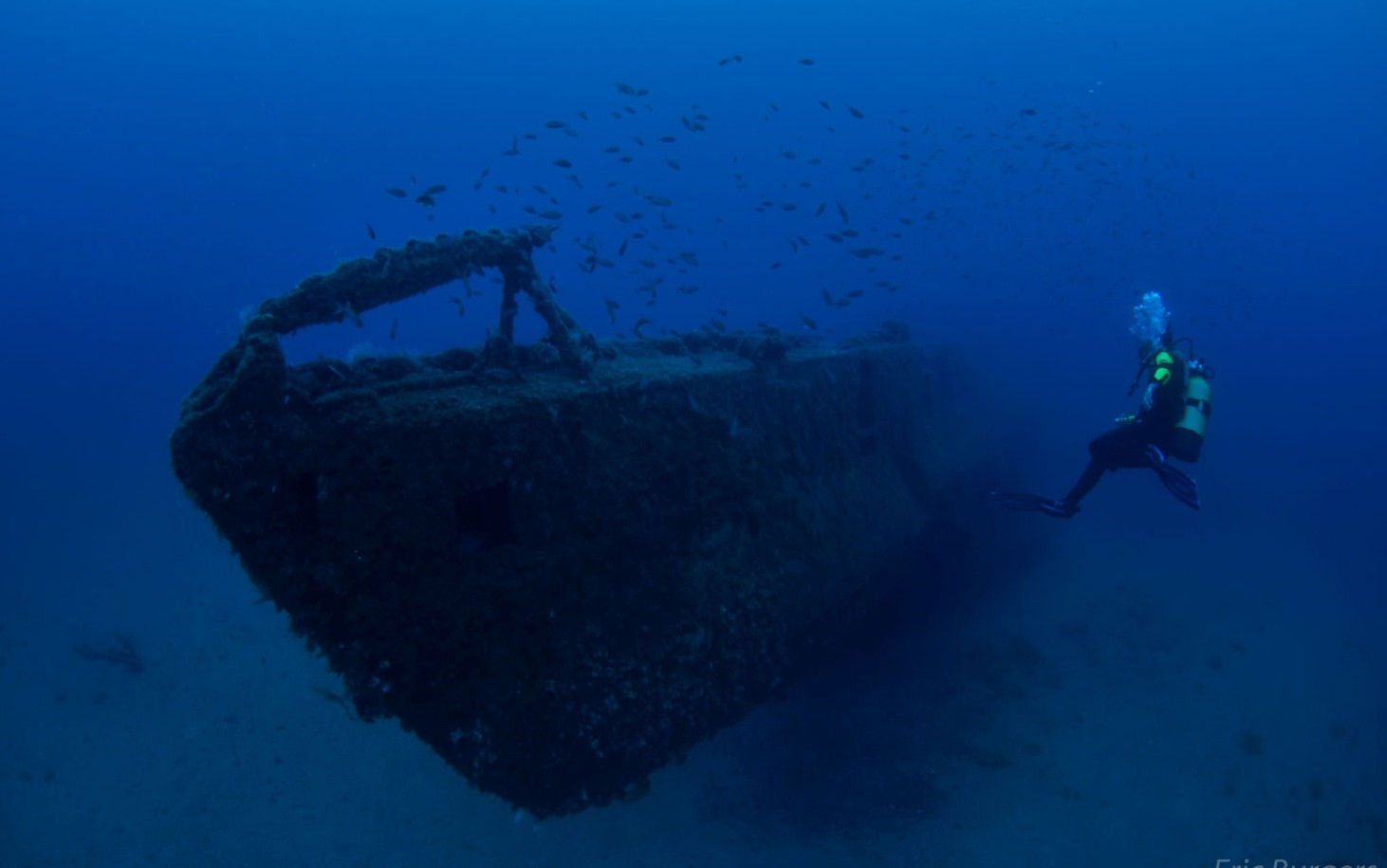 As the waves hit the bow of the boat the vibrations reverberate through my body. I’m sat on the side of an inflatable dinghy, clad top to toe in my scuba diving gear, speeding out towards the horizon.

This is my first real wreck dive and I’m a little nervous.

While my Divemaster training gave me the opportunity to dive a sunken fishing trawler that experience will pale into insignificance after today.

The boat slows and the bow falls now resting atop the water once more.

We are 48km from the shores of sunny Queensland and on a clear day the mainland is only just visible. The inky blue that surrounds us is calling out, tempting us down into the depths.

I’ve always been a cautious diver, nervous some would say. Adrenaline courses through my veins as I perform my pre dive checks and my senses are heightened as my body attempts to prepare itself for the perceived dangers I fear.

Rolling backwards from the edge of the dinghy I hit the water and sink momentarily before the air in my BCD hauls me back to the surface.

Image | 3D model of the SS Yongala via michaelmcfadyenscuba

After falling victim to tempestuous seas during a cyclone the S.S Yongala sank to the depths of the ocean floor on 23rd March 1911. As traces of the wreck washed ashore in neighbouring Townsville a few days later, a search and rescue effort began but unfortunately neither the ship nor its crew were found.

Considered one of the most tragic incidents in Australian Maritime history the S.S Yongala lay undiscovered for almost 50 years before two skin divers happened upon the wreck, and in a bid to identify the vessel recovered a steal safe from one of the ships cabins.

3 years later notification from London confirmed that the safe had been supplied to the S.S Yongala during her construction in 1903.

As work began to uncover the secrets of the now submerged steel ship it became apparent that all 122 souls aboard that fateful night had lost their lives while attempting to bail water from the ship’s compromised hull.

Declared a marine grave site the hull houses the remains of all those who lost their lives. As a mark of respect and to prevent further degradation of the structure it has been made illegal for divers to penetrate the wreck.

Descending down the line

The water is cool but not cold.

I find my buddy and we make our way to the line. The site is relatively exposed to the torment of the open ocean and as such currents often make for challenging diving.

We check our computers, note the time and I give the signal to descend. Water rushes into my ears and the surface falls away as I release the air from my BCD.

After what feels like just a few seconds I can see it. A dark shadow envelops the blue.

The closer I get the more the structure reveals itself. A familiar shape appears, a giant ship laid on its starboard side, cloaked in coral and marine life to the extent that I question whether there is in fact a man made object there at all.

Perhaps this is just another elaborate natural form, a jovial nudge from Mother Nature.

The Yongala is an artificial reef

Known in scuba diving circles as possibly the best marine wreck to dive, the S.S Yongala has a reputation for the diverse range of life that has made the structure home.

While the steel exterior has been blanketed with brightly coloured soft and hard corals, hydroids and sea fans, the interior acts as a shelter from the often vicious currents that flow across the bow.

Local residents include large pelagic species such as barracuda and sharks along with a rather gargantuan Maori wrasse whose been given the nickname ‘VW’ for obvious reasons!

Innumerable species of reef fish, crustaceans and macro life play out their daily lives aboard the vessel having been swept in from the surrounding Great Barrier Reef.

The only solid structure for miles the wreck acts as a refuelling station for many of the larger creatures that traverse the length of the Great Barrier Reef throughout their lives. Giant marble rays, sting rays, turtles, sharks and even whales call into the Yongala to freshen up.

The range of species on the wreck at any one time is mind blowing and has contributed to making it one of the most sought after dive experiences for those who love exploring the underwater world.

Floating alongside the bow of the ship I am dwarfed by the sheer scale of the sunken mass. The closer I get the more the ship reveals its treasures.

The aft and forward masts lay across the deck, the forward cargo hold and the engine room become visible, port holes and walkways even most of the name that adorns the bow can be seen.

Quite incredible after over 100 years at the mercy of the ocean.

My thoughts turn to those who tragically lost their lives as the ship sank beneath the waves. An eerie chill sweeps over me as I think of them sleeping silently inside the vessel, perhaps just a few metres from where I am hovering.

I find myself asking the forces that control our fate that they be protected, allowed to rest in peace amidst the splendour of the habitat that has resulted from such a terrible event.

While I highly recommend a trip out to experience this incredible example of Mother Nature’s ability to up-cycle the footprints our race leaves behind, I would suggest that only competent divers consider a visit.

There’s no need to be dripping in scuba qualifications however, a good understanding of safe dive practise along with a broad range of dive experience will enrich your enjoyment and better equip you to deal with the often unruly conditions out at the site.

There are a few operators who offer various packages out to dive the S.S Yongala. If you’ve time on your hands and are flexible with your dates consider investing in a live aboard, although be warned they are infrequently scheduled so forward planning is required.

We chose to join the crew of Yongala Dive who operate out of the remote coastal town of Alva Beach. While you will have to travel slightly further from Townsville to reach the dive shop, this is a more than adequate sacrifice for reducing your travel time to the wreck itself.

The boat ride from Alva Beach is just over 30 minutes whereas you’ll be bobbing about on the ocean for almost 3 hours if you choose to join an excursion from Townsville.

Where to stay when diving the SS Yongala

Alva is very remote, Yongala Dive do offer dive/accommodation packages and if you’re contemplating spending a few days diving the wreck this is a cost effective option.

Alternatively head back to the main highway and stay in the small town of Home Hill.

For those in a camper or in the mood to camp check out Alva Beach Tourist Park or the free camp at the Home Hill Rest Stop by the train station.

Shhh don’t tell anyone we told you but in the summer months some people camp on the beach for free.

Are you a wreck diver? Do you love exploring the underwater world? Share your comments with me below.