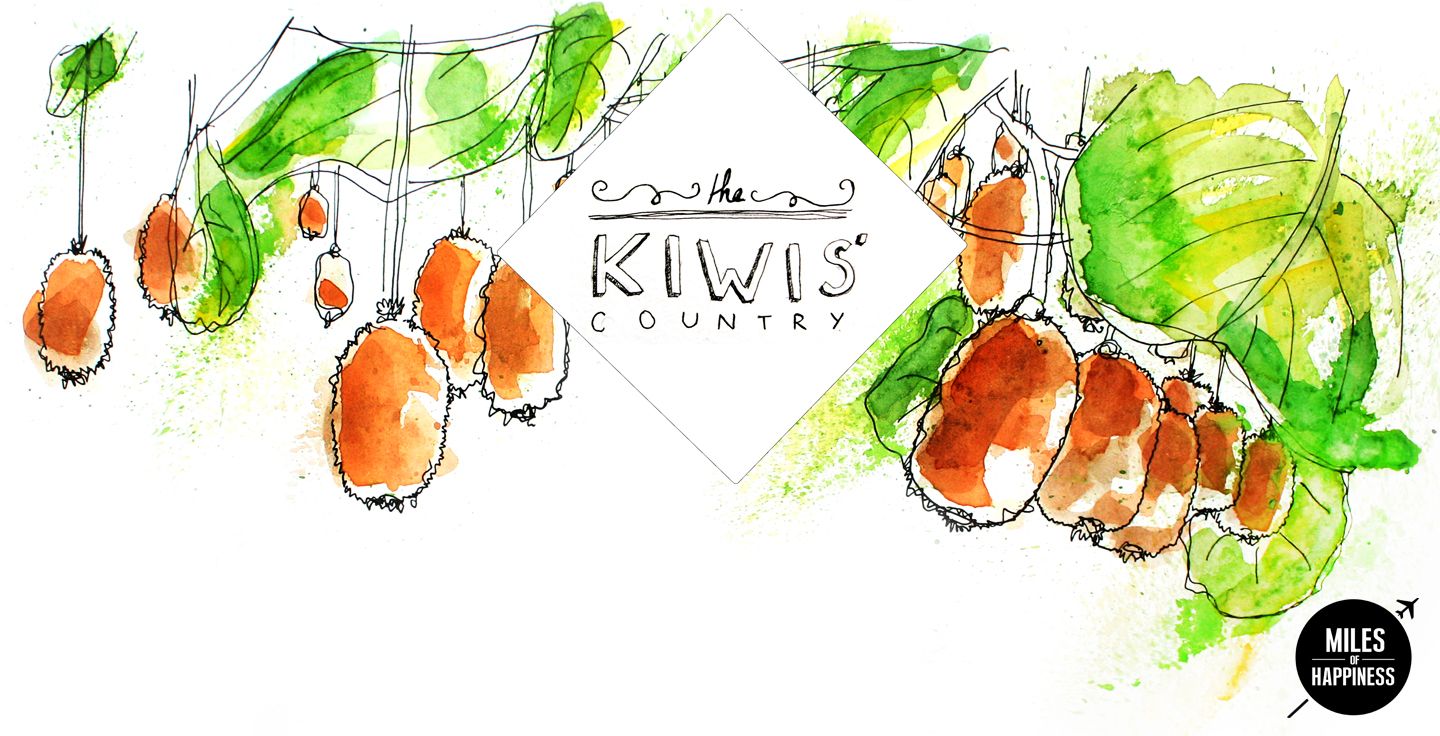 The land of the long white cloud is a heaven for nature lovers. I spent half a year driving through this beautiful country and I fell head-over-heels for it’s varied landscapes at first sight.

As an illustrator I capture memories in ink and colour, rather than with the help of a lens and film.

Translating the landscapes I’ve explored into illustrations, I’ve put together a collection of some of the most scenic spots in New Zealand. It’s a very personal choice. Honestly, I’ve been charmed by every single place I’ve seen there.

Stargaze on the shores of Lake Tekapo

Lake Tekapo is one of those locations that you just have to see with your own eyes: it’s picture perfect in every season.

The lake is famous for its surreal aquamarine colour, created by tiny particles of rock washing down from the glaciers. From the end of spring to summer, the lake shore is blanketed in wild flowering lupins; a magnificent sea of pink, purple and blue.

In autumn, golden spear-like poplars and bright yellow willow trees fringe the water. And during the winter, the backdrop is absolutely incredible, with the Southern Alps covered with snow.

There’s a splendid hike up to the Mt John Observatory.  Those who succeed in reaching the top are rewarded with a 360 degrees view of the region. Those keen to relax can chill out in the hot Tekapo springs with a view over the lake. Not a bad alternative!

Wellington is deemed to be the coolest capital city in the world, and it is. If you need convincing check out this post by Young Adventurous.

In addition to being warm, arty and lively, you’ll also find the remnants of times past, which bring a real charm to the city.

The historic Wellington Cable Car is one of the most recognisable symbols of the city. It takes you from Lambton Quay to the entrance of the Botanical Gardens and Kelburn Lookout, following a track that crosses four bridges and goes through many tunnels, giving you a beautiful view on the city.

Auckland is the largest city in New Zealand, but it doesn’t prevent it keeping the charm of the country.

A city, yes, but with volcanoes looming large in the distance! From Devonport, you’ll get a perfect view of suburban life in New Zealand. The city skyline and its superb buildings like the slender Sky Tower are juxtaposed against elegant yachts that adorn the foreground, and undulating hills and volcanic terrain visible in the distance.

Explore the real Middle Earth at the Tongariro National Park

It’s probably one of the most beautiful hikes you’ll ever do in your life –no, I’m not exaggerating.

It’s unbelievable how quick the scenery changes in such a small territory. You’ll feel like you’re travelling in time.

Walk with giants in Northland

There is a real wonderland in the North called the Waipoua Forest.

Imagine a place where giant kauri trees carpet the ground, a place where you can loose yourself in the sheer magnitude of Mother Nature’s creativity.

In the middle of this spectacular place, sits Tane Mahuta, The King Kauri Tree. One of the largest trees on the planet its trunk measures 13.7m of diameter and stands at 51.2m tall. It’s been standing there for over 2.500 years.

Prior to human settlement in New Zealand about a third of the land area was covered in such giants, now there are only a few hundred left –they are… Dinosaurs.

Stand on the edge of the world at
Cape Reinga

Cape Reinga is situated at the northernmost tip of the North Island.

The road that wends its way north from Kaitaia is absolutely stunning, perched on a ridge and surrounded by sparkling seas on both sides… It’s sensational.

Upon arrival, you have to walk down the windy coastal pathway to the Cape Reinga lighthouse. The view is breath-taking. From the Cape, you can see an area of especially rough and choppy water where the east Pacific Ocean and west Tasman Sea meet.

This is a very special place for the Maori people. It is said that when you die, your spirit makes it North over New Zealand, to enter the underworld after leaping off the Cape. The Maori name for the area is Te Rerenga Wairua, which literally means ‘the leaping-off place of spirits’.

There is a beautiful hidden secret among the green jungle of the Bay of Islands…the spectacular Rainbow Falls. I highly recommend tramping the three hour trail from Kerikeri to see this scenic spot.

The trail is absolutely charming and crosses a small set of falls, follows a babbling river with dense groves, and is lined with exotic trees and singing birds. Although it does require some effort to see, the 27m high Rainbow Falls are worthy of the effort exerted en route .

Surrounded by the bush, the falls create a spectacular backdrop to the almost circular crystal clear pool that captures the falling water. The misty aura, a result of the spray from the falls, adds to the magic of the place.

New Zealand is a natural Disneyland for adults! It truly is.

I hope you’ll get the opportunity to explore this amazing country. If you’re keen to immerse yourself in the land of the long white cloud, read our post 10 Things That Will Make Your New Zealand Trip Worth It.

Have you explored New Zealand? Share your favourite NZ locations with us below!