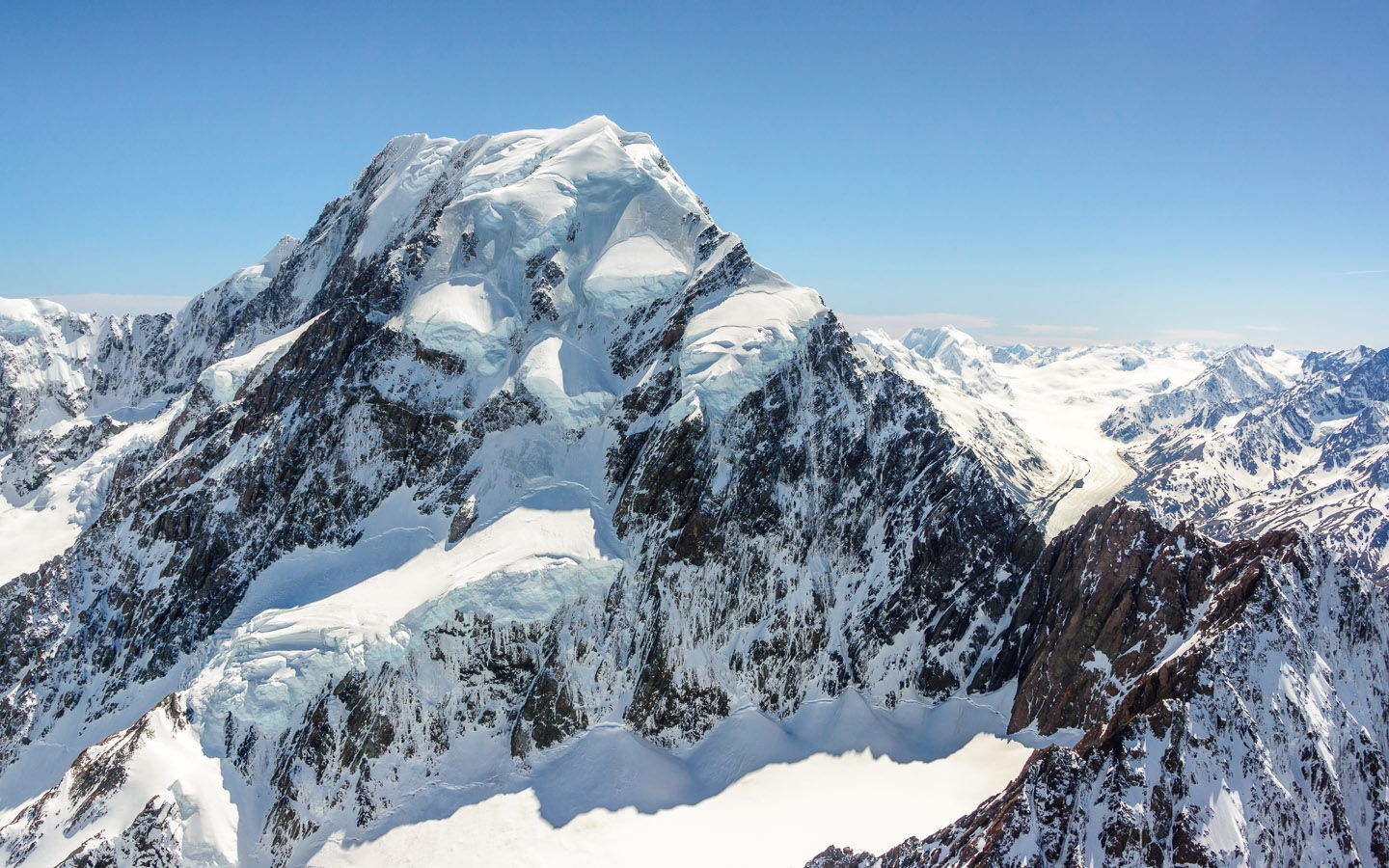 You Need To Take This Air Safari Over Aoraki National Park

New Zealand is known for the magnificent alpine range which rises high above the varied landscape of the south. Sculpted by the powerful forces at play deep beneath the earth which subduct and diverge the neighbouring Pacific and Australian plates, the colossal peaks of the Southern Alps serve as a reminder of Mother Nature’s indomitable creativity.

Awash with a variance of micro climates and geology, the elliptical Mackenzie Basin offers a little horizontal respite from the frozen peaks which line its borders.

The flat lands of the basin have seen vast changes in the last 300 million years.

Sculpted by the crushing force of archaic glaciers the view today is one of vibrant colour; a patchwork of pastures, turquoise lakes, snow-capped mountains and undulating terrain.

Named after Scotsman James McKenzie who once held claim to the land the basin and its neighbours, the Westland and Aoraki/Mount Cook National Parks are the jewel of the Southern Alps.

For those visiting the Mackenzie region, a ground level view of the surrounding countryside offers innumerable picture postcard scenes.

The palette of colours swathed over the landscape changes with each sunrise and sunset. Hues of pink, yellow and ochre spread across the valley floor with the changing light.

Despite the beauty of the scene from ground level, an elevated view point serves only to showcase additional mesmerising vistas of the sculpted alpine terrain.

The landscape below becomes a paint pot of vivid tones bursting from the darkness of the greywacke rock as the peaks of the indomitable mountains sail past, their snow clad forms glistening in the sun.

To those visiting the region I urge you to take to sky and sample this breathtaking landscape from above.

Described as an alpine wonderflight, the Grand Traverse operated by Air Safaris offers a celestial view of some of the most isolated areas within the Mackenzie region.

Taking my seat behind the pilot the propeller springs to life in an almost orchestral murmur of clicks and whirrs.

Racing towards the end of the runway we take flight and climb skywards over the tiny town of Tekapo and the azure waters of the neighbouring glacial lake.

This elevated view opens up an entirely different dimension of colour, texture and form to admire.

Peering down on the landscape sculpted by the most recent ice age, it is clear to see the effect that the movement of the once prominent glaciers had on the ground below.

Carving out a path through the mixture of greywacke, argillite and schist, the sediments produced have remained suspended in the ice for thousands of years. Over recent decades they have been deposited in the melt water which comprises so many of the regions lakes.

Reflecting only turquoise from the spectrum of light, it is this rock flour which is responsible for the colourful embellishment to the scenic vistas of the Southern Alps.

Flying alongside snow capped peaks and over vast sheets of compacted ice I find myself at a loss for words. In my lap my notepad is open but the page is blank, I can’t take my eyes away from the frozen world passing by outside.

The view from my window is a masterpiece of lilac, turquoise, brilliant white and earthy brown. Reaching the mouth of Lake Tekapo the Godley River comes into view, its silt laden waters carving a melody of fluid forms into the almost unnatural hue of the lake.

Beneath me the earth appears to melt into a sea of white. My view is enveloped by snow clad peaks, brilliant blue streaks of glacial ice hidden under plumes of soft snow and vertical drifts of great avalanches falling towards the valley floor.

The head of the Tasman Glacier comes into view and I can see icebergs floating in the milky terminal lake.

The longest in New Zealand, the glacier flows 29km down the Tasman Valley and is popular with adventurous skiers and climbers keen to sample the delights of this remote winter escape.

Leaving the upper reaches of the Tasman Glacier behind, we fly towards the ridges of the Main Divide. The shores of the island’s west coast are now visible on the horizon.

A vibrant red alpine hut is juxtaposed against the clinical expanse of the surrounding snow, a safe haven for those who explore the frozen wilderness on foot it looks as though a child’s toy left behind in a sandbox of white.

The pristine landscape beneath me melts into tones of green and shades of brown before reaching the rich waters of the Tasman Sea.

Colours of winter fade into those of spring as the snow retreats and the vibrant green of pastures and meadows return.

Standing like a fortified castle wall, the Southern Alps shelter much of the central and east coast from the heavy moisture laden clouds which blow in off the Tasman Sea.

Depositing their cargo as they struggle to rise above the peaks of the divide, these clouds cultivate a temperate rainforest which clings to the lower reaches of the Fox and Franz Joseph Glacier offering a scene unique to this diverse region.

Turning back towards the Mackensie Basin and the town of Tekapo the imposing peak of Mount Cook appears in the viewfinder of my camera.

At 3,754m it stands supreme as the country’s highest peak. First climbed on Christmas Day 1894, it appears unobtainable even by today’s standards.

Having already climbed Mount John which I had described as a ‘mountain’ when sat at the top recovering, I was shocked to see its tiny form rising from the valley floor.

The recognizable spherical form of the Mount John Observatory appears on the summit and I am reminded that the protected Dark Sky Reserve above me is just as inspiring as the landscape below.

Back on the ground I attempt to process the real of film flicking over in my mind.

I’m left in a state of awe, balancing the colours, deciphering the sheer scale of the landscape.

Those who know me well may be surprised to see my report from 15,000ft above an alpine range.

I’ve never found the act of flight to be a particularly pleasing sensation, couple this with an enclosed space and normally I’d rather remain on Terra Firma.

Air Safaris and their Grand Traverse flight served to show me the beauty of an aerial existence.

While all thoughts of fear left my mind the minute I first looked out over the dynamic landscape below, I do wonder if I’ll ever be so fortunate as to experience flight in such a diverse and picturesque setting again.

Air Safaris operate from 3 locations across the MacKenise/Mount Cook region and you can hop aboard their Grand Traverse excursion from Tekapo, Glentanner or Franz Joseph.

Have you seen the beauty of the Mackenzie Basin and Aoraki from above? Share your comments below.