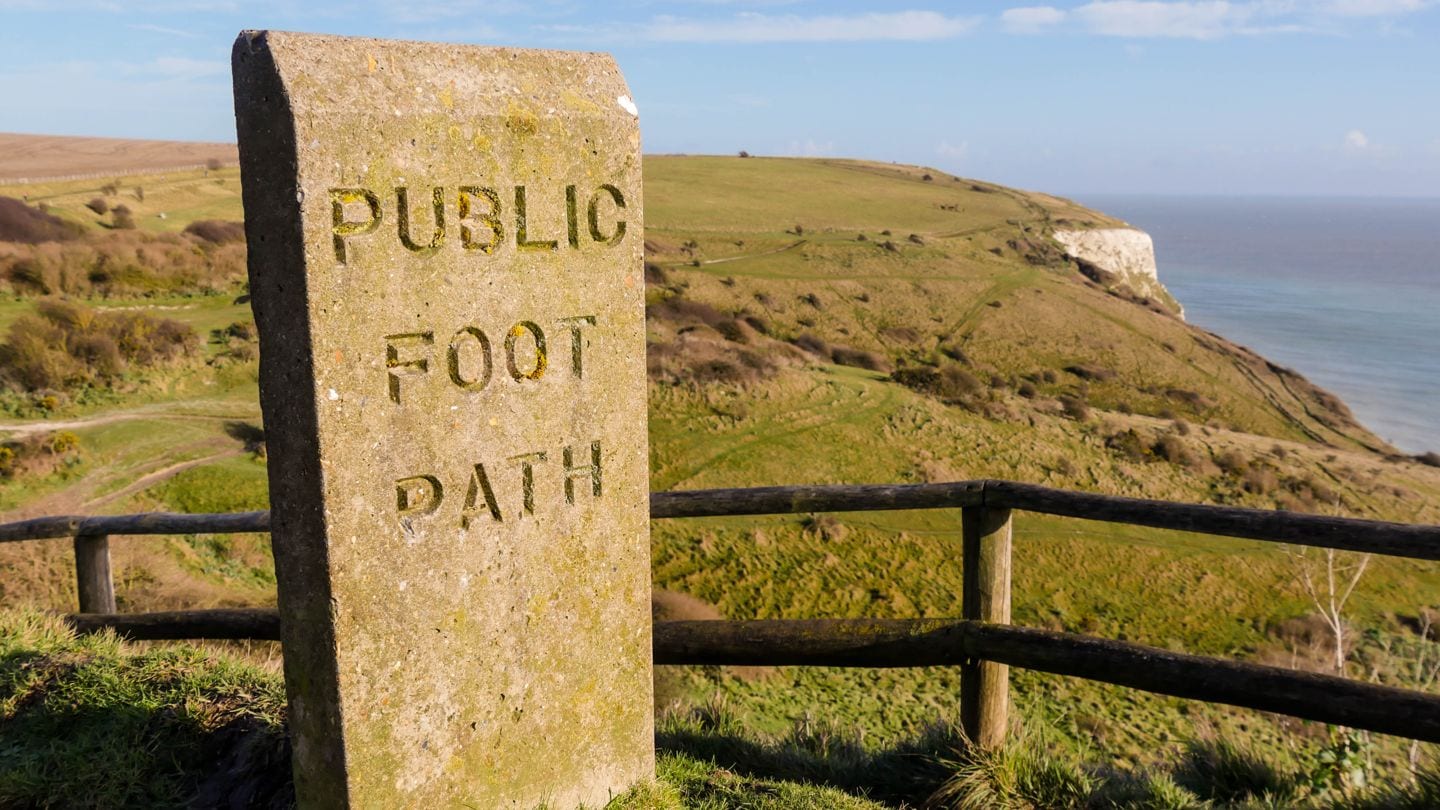 The wind whipped my hair into a frenzy and for a moment streaks of blonde obscured my view. Wet mud clung to the bottom of my jeans and layered thick along the sides of my walking shoes.

In just 30 seconds I would find myself stretched out on my back, bathing in a puddle of viscid mud. I momentarily anticipated this yet seemingly sure-footed took just one step forward before I came hurtling down towards the ground.

Ten minutes into a two hour hike I looked as though I’d signed up for a luxurious mud therapy spa and had insisted on staying fully-clothed throughout the treatment.

Righting myself as gracefully as I could I resolved to ignore my failing sense of humour and press on along the path ahead.

Walking along the White Cliffs of Dover

Immortalised within generations of British pop culture, the White Cliffs of Dover have become the symbol of a nation.

Where once soldiers fought for control of the English Channel from within a labyrinth of tunnels buried 23m beneath the headland, now the world’s busiest passenger port some 100 metres below extends a warm welcome to visitors from across the globe.

Towering above the tempestuous waters of the strait, this chalky expanse of cliff face has witnessed numerous iconic moments in Britain’s remarkable history; from the arrival of the Romans to the return of the British forces from Dunkirk, a stream of emotive scenes have unfurled in front of these iconic white giants.

Inspired by a crisp blue sky and the promise of picturesque views, I’d made my way south from London and had decided to traverse the cliffs along the four-mile trail dubbed one of Britain’s best coastal walks.

In 55BC Julius Ceaser arrived at Dover with two legions of soldiers and is said to have described Britain as “a wild island with giant natural fortification”; not a bad assesment considering he faced the towering cliffs and the “armed forces of the enemy” who rained a torrent of weaponry upon their invaders.

Fortunately, my visit to the White Cliffs was much more sedate and the only battle I faced was the one to stay upright as I skated over the mud-covered pathways.

Setting out from the Gateway Visitor Centre I followed the coastal path along the headland and (after taking a brief dip in a muddy puddle), soon became engrossed in the breath-taking views across the channel.

The cliffs of France’s neighbouring Caps et Marais d’Opale Natural Regional Park were a hazy silhouette on the horizon, and in the foreground rotund ferries painted the water with undulating white wakes as they made haste towards the continent.

Wending my way past sheer drops and tiered descents I walked, rosy-cheeked and covered in mud, through the patch-worked interior of the National Trust owned Langdon Cliffs. Visiting Exmoor ponies littered the landscape ahead and in the distance the white form of the South Foreland Lighthouse stood juxtaposed against its verdant surrounds.

A landmark of the region and a vital navigational aid, the Victorian era South Foreland Lighthouse was built to guide mariners through the Strait of Dover; three miles off shore there’s a 10-mile-long, constantly shifting sandbank known as the Goodwin Sands (A.K.A the Great Ship Swallower), which wreaks havoc on unsuspecting vessels making port.

Open to the public during school holidays, the lighthouse offers weary ramblers the opportunity to refuel at Mrs Knot’s Tea Room, and entertainment to youngsters by way of kite flying and lawn games.

Sadly my visit was during a blustery January afternoon and so there were neither kite flying nor cake eating activities to be found on arrival; I made do with a dry patch of grass aside the cliff’s edge, a bottle of water I’d bought from the visitor centre, and a spectacular view out over the calm waters of the channel.

The trail to St Margaret’s Bay

Image – A 4K Photo moment at the White Cliffs of Dover

Had I continued along the trail for another mile or so I’d have reached the quaint village of St Margaret’s at Cliffe.

Nestled between a gap in the indomitable chalk cliffs its shingle beach and welcoming coastguard pub make it a delightful way-point for those looking for an extended adventure along the coast. The closest point to France, from here many a cross-channel swimmer has dipped a nervous toe in the water and set off across the blue.

From the top of the hill, bus 15 shuttles back to Dover or onward to Deal every hour.

I also took the opportunity to utilise the 4K Photo feature on my Panasonic Lumix GH4 and captured a delightful joy jump with a cross-channel ferry and the cliffs’ edge silhouetted in view.

Find out more about 4K Photo Mode here or read more about my foray into 4K Photo.

Hiking inland I picked up the path that would lead me back to the visitor centre. The wind had picked up and despite the blue sky overhead I felt a chill start to work its way toward my core.

The mud that had caked my back and thighs when I slipped over earlier had set solid, and now felt like an ice block. I’d nothing to fend off the cold and my enthusiasm for adventure was waning. In true British fashion I decided it was time for tea and cake, for there’s no ailment you can’t cure with a hot beverage and a sugar rush.

There are 16 miles of trails (around eight miles either side of Dover) that hug the line of the cliffs however if you’re after a taste of the scenic views on offer, the South Foreland Walk to St Margaret’s Bay (four miles return) will provide picture perfect views aplenty. You can make this a circular trip and walk back (or catch the bus) to Dover, or you can continue along the cliffs to Kingsdown.

Wheelchair users and those looking for a short stroll can walk out along the boardwalk to a viewpoint which offers panoramic views of the English Channel, the coastline, and the bustling port below.

Click here to read more about the network of trails that line the headland.

Join a head light lit tour of the tunnels within the Fan Bay Deep Shelter which was commissioned by Winston Churchill in 1940. Admission to the tunnels is by timed ticket only. You will need to visit the Fan Bay Ticket Office next to the White Cliffs Visitor Centre to pick up your tickets and a map to the site, before walking to the tunnels.

During school holidays all of the additional points of interest are open to the public, however for a more leisurely stroll along the cliff top choose a clear day out of peak season and brave the cooler temperatures for a more intimate adventure on Dover’s iconic coastline.

Have you hiked the trail along the White Cliffs of Dover? Share your trip tips with me below!