A Guide To Exploring Seattle on a Shoestring 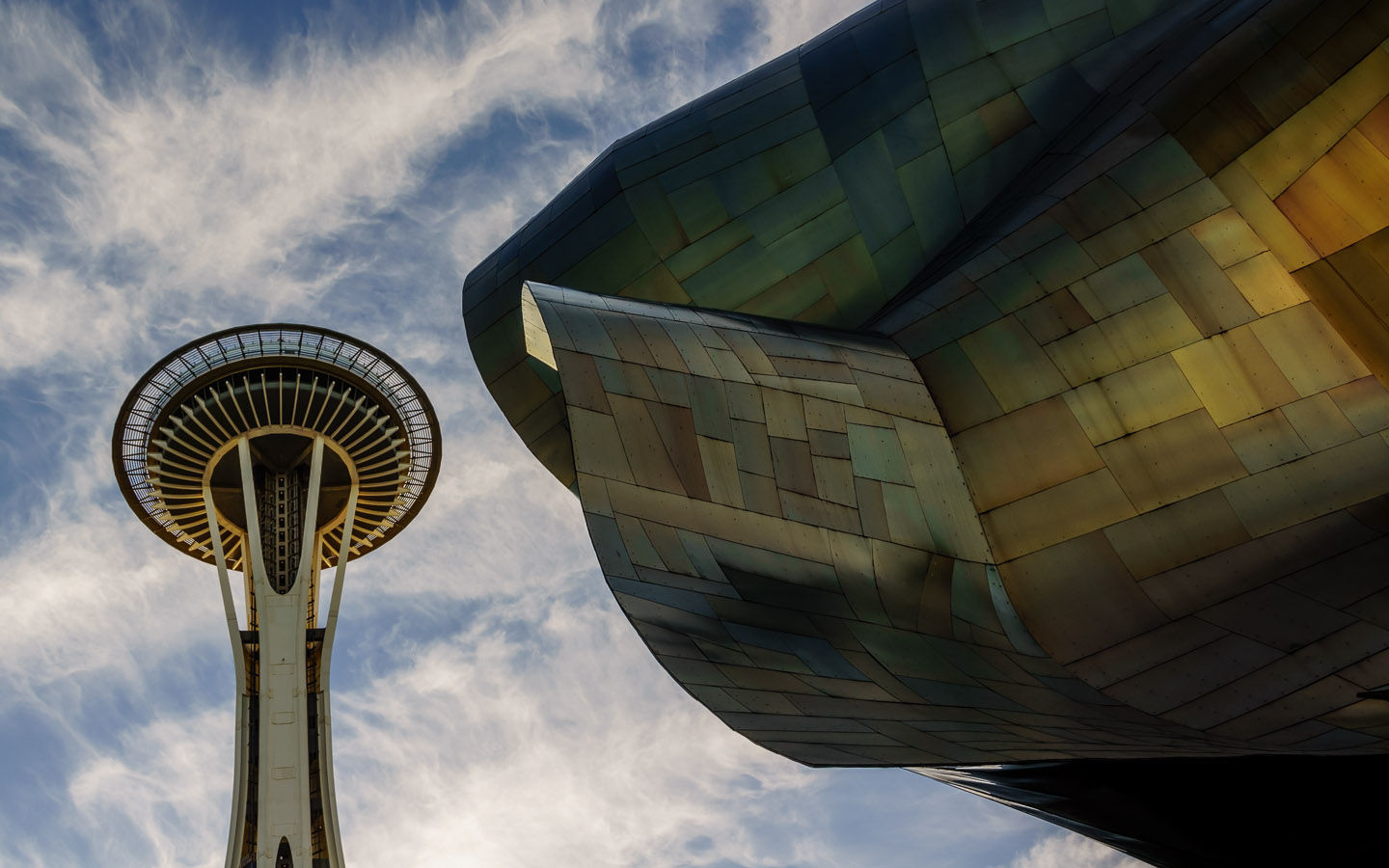 America’s Cinderella city Seattle sits straddled between the Cascade Mountains to the east and the Olympic Mountains to the west. Having morphed into a raging cosmopolis over the last half a century, the city offers a diverse blend of vast alpine landscapes and glossy urban living.

Planning a trip to the Emerald City? Below is our guide to Seattle on a shoestring if time is as tight as your budget.

A major landmark in the city and one of the most recognisable buildings in the United States, the Space Needle was originally built for the 1962 World’s Fair. With the space race in full swing and Seattle firmly on the map as an an aerospace city after the invention of the Boeing aircraft, the focus of the fair became to show that the USA were to be considered as major players in the quest to conquer space.

With over 2.3 million visitors to the fair the Space Needle’s elevators were used by 20,000 people each day, and thanks largely to the spectacular views of Downtown Seattle as well as the Olympic and Cascade Mountains, Mount Rainier, Mount Baker, Elliott Bay, and the surrounding islands from the observation deck, the building still draws in a huge crowd on a daily basis.

If you desire to take in the views and board the elevator to the top then you will have to part with $19 for the privilege, alternatively you can book a reservation at the Sky City restaurant and receive your lift pass for free.

As I am incapable of rational thought when at height we decided to vito the ride to the top and instead enjoyed walking round the structure and taking in the various views on offer at ground level. For an alternative perspective on this iconic structure take the tram from Seattle Centre station to Westlake Centre Mall where you can enjoy a more elevated view of the Needle and Space Centre.

Not a sport that I am particularly familiar with however the concept is simple enough to understand.

Essentially the game consists of throwing a disc at a target and according to the Professional Disc Golf Association, ‘The object of the game is to traverse a course from beginning to end in the fewest number of throws of the disc’. Simple enough? Perhaps not.

Having read the rules and regulations it appears to be similar in principle to the regular game of Golf, there are a number of throwing styles, various types of disc and a ‘par’ scoring system. The one difference between the two sports is that 87% of Disc Golf courses are free and therefore a great activity for nomads on a budget.

The coach on which we had travelled across the US/Canadian border dropped us at the entrance to the EMP Museum which sits just in front of the Needle. An architectural marvel the building was designed to evoke a rock ‘n’ roll feeling and to reflect the museums collection of exhibits on contemporary popular culture.

Designed by California architect Frank O. Gehry it was his intention to translate the ideas and ideologies that fuel modern popular culture into the building itself. An early design model was sculpted from a collection of guitars that O. Gehry had sliced into pieces and collated into a proposed form, a fitting muse and salute to the ethos of the museum .

The EMP is one of the best things to do in Seattle with kids. ‘A fusion of textures and myriad colours, the EMP’s exterior conveys all the energy and fluidity of music. Three-thousand panels, made up of 21 thousand individually cut and shaped stainless steel and painted aluminium shingles encase the outside of the building. Their individual finishes respond to different light conditions and appear to change when viewed from different angles, reminding audiences that music and culture is constantly evolving.’ – www.empmuseum.org

At $20 / person the museum is worth every penny, for those of us who adore film and TV from a certain era or a music legend, even cartoon and comic book heroes, there will be something to tickle your fancy and have you amused for hours. FYI online and student discounts are available.

We opted to use Airbnb to book our accommodation, as is often the case is big cities hotel costs in desirable locations leave the budget traveller despondent, however through the website we have found very reasonably priced options in all the US and Canadian cities we have visited.

For just $67 a night we had a wonderfully snug basement flat in a central location just a short walk from a train station and a ten minute journey into downtown, (this was less than the cost of a private room in a hostel). With such value on offer and the opportunity to connect with the local community during your visit I highly recommend the experience.

Recognised as America’s premier food market Pike Place has been in operation for over one hundred years and is often referred to as ‘The Soul of Seattle’.

Founded by Seattle City Councilman Thomas Revelle in 1907 after citizens complained at the rising cost of onions, he proposed a forum be set up where the consumers could meet the producers directly, a philosophy that is still the foundation of all Pike Place Market businesses. On the first day of operation eight farmers brought produce for sale, with an estimated 10,000 shoppers eager to sample this new purchasing experience they sold out before 11am.

Today the market is housed in a specialised building containing more than 200 year-round commercial businesses; 190 craftspeople and approximately 100 farmers who rent table space by the day; 240 street performers and musicians; and more than 300 apartment units, most of which provide housing for low-income elderly people. Attracting more than ten million visitors each year it is one of Washington States most visited attractions.

With no entry costs and no pressure to spend any money, although it is incredibly difficult not to, this has to be our favourite free activity in Seattle. The wealth of fresh produce is a visual feast for the eyes, and with foods to tantalise every taste bud it is difficult to choose which to sample.

The most entertaining of stalls in the fresh fish market, young fisherman delight the crowds sending their catch flying through their from the iced display shelves to be weighed and packaged. With street performers and artisans of a wide range of crafts displaying their skills I would recommend allocating a whole day to explore the treasures on offer.

At $16 this is a little pricey but well worth the expense, not necessarily for the guided tour but for a glimpse back in time and into a place that would be unrecognisable as the former city of Seattle.

Underneath downtown spreads a network of underground passages and basements that form part of the original ground level of the city, after the great Seattle fire of 1889 the city was rebuilt over the top of its ruined remains. The story of the fire is one of unfortunate circumstances: with the fire chief out of town efforts to extinguish a containable fire in a city built predominately of wood, failed when water pressure dropped due to excessive use of hoses in the effected area.

In total 31 blocks were destroyed and many lives were lost.

The guided tour begins with a twenty minute introduction into the story of the underground world and it’s inhabitants, and then a fifty minute tour underground through the hidden passages that were once main roads, store fronts and homes.

Have we convinced you to see Seattle on a shoestring?