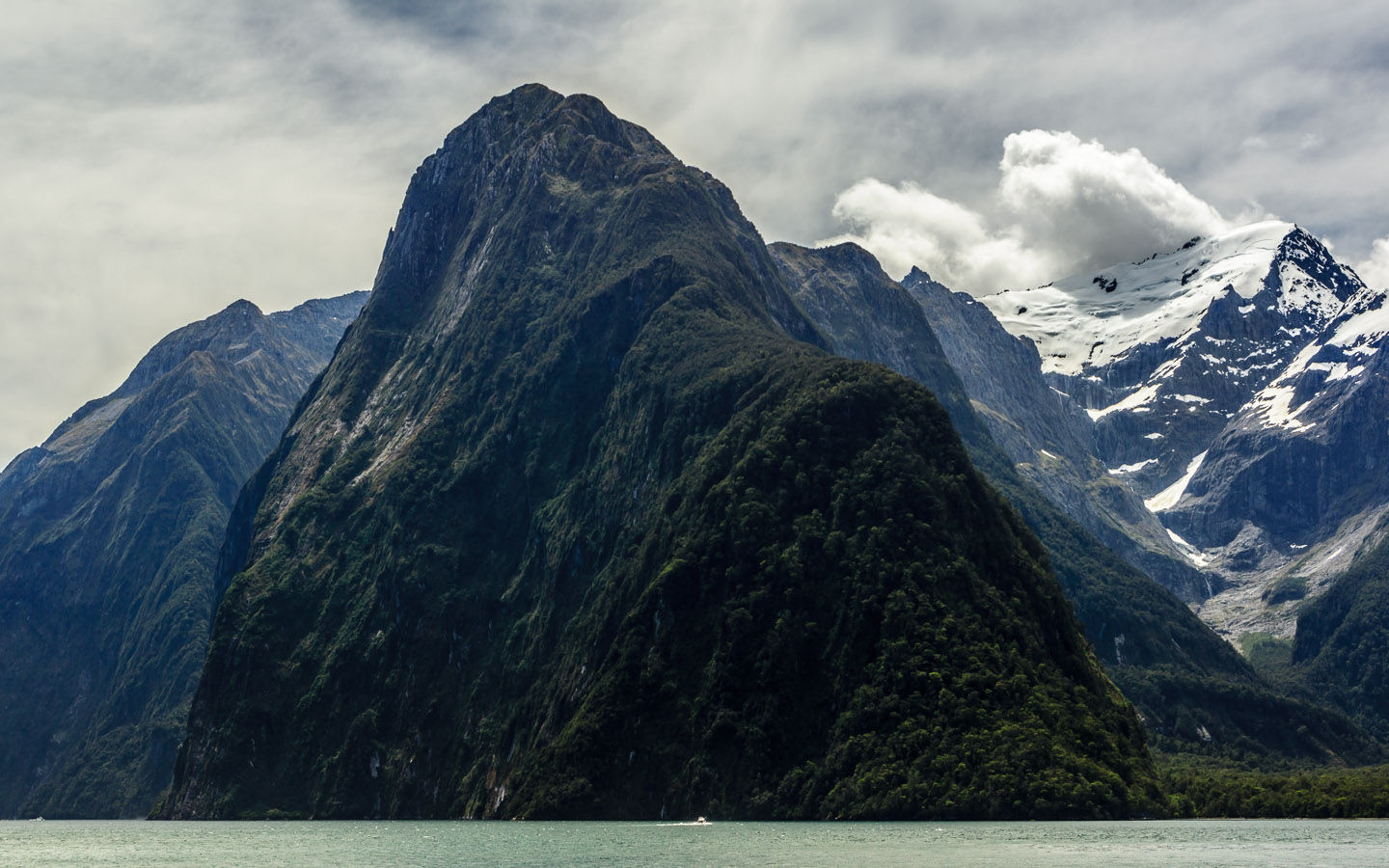 Sailing On The Indomitable Milford Sound

Tucked away in the south west corner of New Zealand, Fiordland is a landscape brimming with contrasting textures and colour. While the view today is one of indomitable peaks reflected in the inky waters of the infinitely deep sounds, Fiordland was once enveloped by giant sheets of ice. Carving away at the rock face beneath, the glaciers of the region’s past have sculpted terrain so unique that it has become one of the most iconic landscapes on earth.

Having already explored parts of the southern alpine range on foot, by kayak and in a helicopter, I thought perhaps Fiordland would not have such a profound impact on me.

Mesmerised by the Milford Sound

Having made camp in neighbouring Te Anau, we joined the team at Great Sights on their Milford Sound Day Tour.

Taking in the awe inspiring landscapes of the Fiordland National Park, the trip offers an insight into the evolution of New Zealand’s mountainous terrain and served to inspire within me the desire to relinquish all ties and live forever in its vast wilderness.

Accessible over land only by a stretch of tarmac which extends out into the remote wilds of Fiordland from the town of Te Anau, the Milford Sound is perhaps the most famous of the regions residents.

Hopping on board a coach in Te Anau we sat in silence as the diver chauffeured us along the shores of Lake Te Anau, into the Eglinton Valley, through the Hollyford Valley and finally through the Homer Tunnel to the Milford’s Freshwater Basin.

A patchwork of colour and a kaleidoscope of mountain peaks washed past the window over the course of the two hour trip.

Stopping to take in the beauty of the aptly named Mirror Lakes, and then to marvel at the capacity of water thundering down through The Chasm, a natural rock basin carved by the powerful Cleddau River, the journey itself was almost as breathtaking as our trip out on the waters of the Milford Sound.

Arriving at the Milford Sound the cloud that had lingered over head throughout our coach trip was no longer obstructing the sun’s rays.

The view over the water was picture perfect, and the previous day of rain had invigorated the numerous waterfalls that flow down into the sound.

White water and spray came crashing down in abundance from the peaks above.

As the boat made its way out of Freshwater Basin, so named due to the high percentage of freshwater in the harbour, Bowen Falls and Cemetery Point came into view.

I stood on the upper deck of the boat watching as the water rushed over the edge of the ridge and down into the sound below.

Patches of vibrant lime green moss clung to the rock face, and as we sailed past a rainbow appeared in the spray.

The hanging valley of Sinbad Gully and the summits of Mt Phillips, Mitre Peak and Llawrenny Peak appeared on the left of the boat, and offered the opportunity to marvel at the sheer scale of the landscape.

It is believed that the Māori discovered the region some 1000 years ago and returned seasonally to collect the much prized pounamu, or green stone as it is referred to today.

Geologists will tell you that the regions unique landscape was formed by the movement of archaic glaciers that ripped through the earth thousands of years ago. However I was much more taken by the Māori legend that accounts for the region’s conception.

Demi-god Tuterakiwhanoa is said to have carved the rugged landscape from formless rock with his Te Hamo while chanting a powerful karakia.

Gradually making his way south and perfecting his technique as he went, the Milford Sound was his greatest achievement.

Reaching St Anne’s Point and the Tasman Sea the boat turned, and for the first time I looked back into the sound.

The snow-capped peaks which blanket much of Fiordland were visible either side, and in the distance the many waterfalls glistened in the sun.

Home to a number of species of marine life the sounds were one of the first locations within New Zealand to attract visiting Europeans.

Enticed by the prospect of seal fur and whale meat, fishermen would visit the Milford when the weather allowed and collect these valuable commodities to sell in neighbouring Australia.

Today the region’s marine life is protected and thrives in the rich waters of the sounds throughout the national park.

As we sailed past aptly named Seal Point, a colony of New Zealand fur seals were bathing in the afternoon sun. Unaware of the threats their ancestors would have faced, they seemed content to snooze despite the interest from a boat full of camera clicking tourists.

Making our way back into Freshwater Basin I took the opportunity to gaze out at the fiord one last time.

Our stint on the Milford was brief but it offered the opportunity to breathe in the landscape of one of the world’s remote wildernesses.

The magnitude of the terrain, the wealth of contrasting colours and ever changing views were awe inspiring.

A Milford Sound Day Tour with Great Sights is a must for anyone visiting the New Zealand’s south.

Read more from our adventures in New Zealand and check out our Instagram feed for inspiring daily Kiwi #Travelgrams.

Have you spent time exploring Fiordland? Share your comments with us.