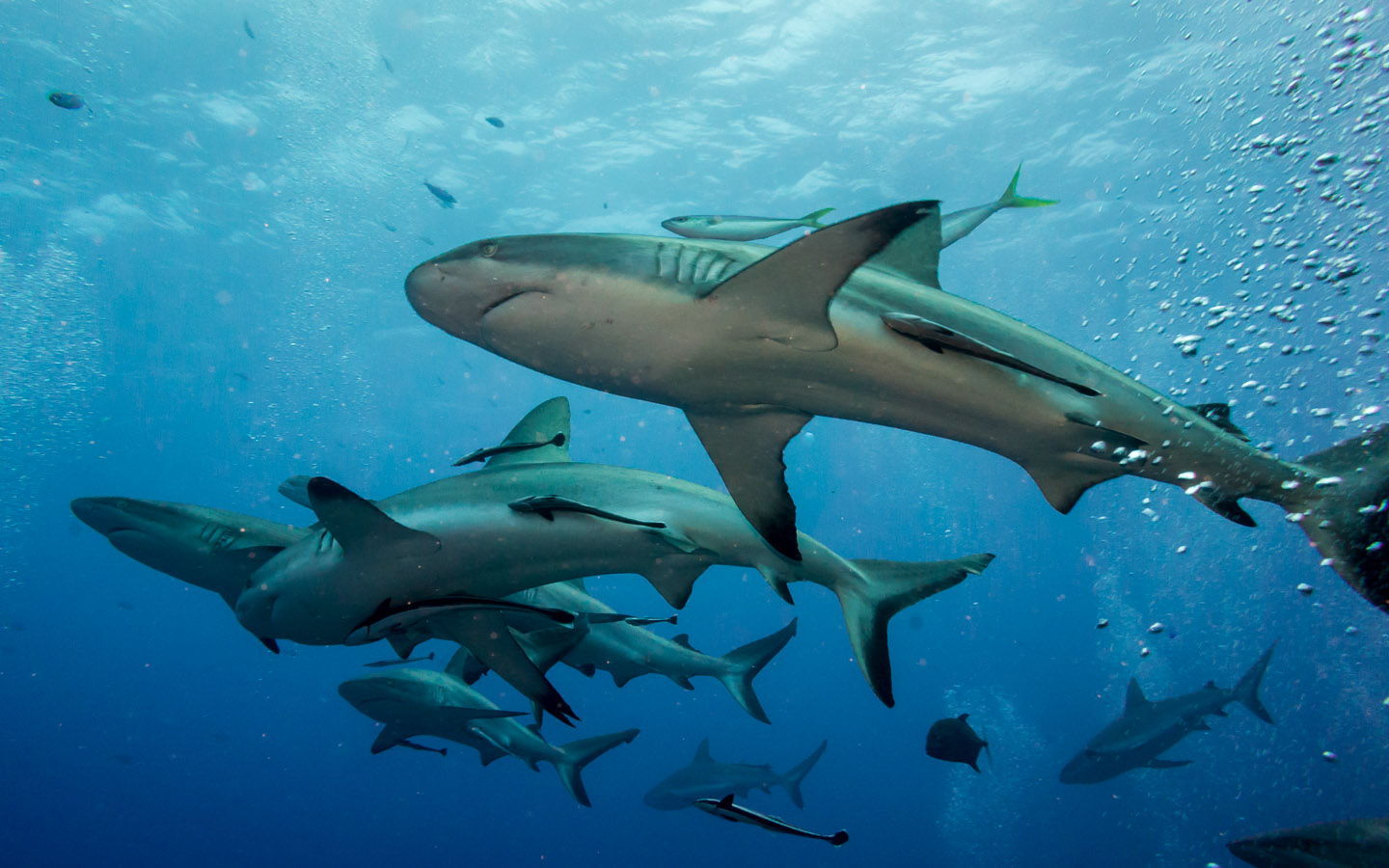 I can feel my heart beating rapidly and it’s taking all my concentration to keep a terrified look from attaching itself to my face. I sit down on the bench and take a deep breath. I’m going diving with sharks at Osprey Reef.

‘So when we get down there will the sharks already be there?’ asks my dive buddy.

‘Yes, they are familiar with the format and can sense the boat approaching, they’ll be down there anticipating a meal’ I reply.

I’m doing my best to sound calm and authoritative. I’m working as a Divemaster for one of the few 5 star live aboard boats on the planet and I’m determined not to look incompetent.

‘No they won’t eat us, by the way did you sign the waiver?’ I joke

My buddy frowns at me, I’m not sure he appreciates my humorous attempt to disguise my own panic.

Standing up I grab my wetsuit and start to set up my gear. The trip director blows his whistle and launches into the dive brief.

‘Good morning everyone, and welcome to North Horn here at Osprey Reef. Our first dive of the day is the shark feed.’

Shark diving in the Coral Sea

The Coral Sea is a marginal stretch of water that hugs the coast of northern Queensland and reaches out to the shores of Vanuatu, Papua New Guinea, New Caledonia and the Solomon Islands.

Home to the Great Barrier Reef, one of the world’s greatest natural wonders, it attracts scuba divers from all over the world who are keen to explore its rich marine environment.

For the more adventurous aquatic explorers there is the opportunity to spend seven days on a live aboard dive boat exploring the islands, outer Great Barrier Reef and Osprey Reef some 350km from Cairns.

With the chance to dive the world famous Cod Hole, Steve’s Bommie, Snake Pit and join in an epic shark feed this really is a week you’ll never forget.

While the trip is open to all certified divers it is aimed at those who are slightly more experienced and able to competently manage their own dive profiles and navigate a site unaided.

Having already explored the outer areas of the Great Barrier Reef our next port of call was North Horn and the shark feed dive out in the exposed waters of the Coral Sea.

Diving with sharks at Osprey Reef

Osprey Reef is a submerged atoll that forms part of Northwest Group of islands in the Coral Sea. While only about 25km in length and 12km across it has become an oasis of life in a desert of deep surrounding ocean.

While the inner lagoon is a meagre 30m in depth the vertical external walls of the reef plunge down to 2000m+  and often tempt creatures of the deep to surface and bask in the warm shallows.

One particularly well known resident is the dwarf form of Nautilus Pompilius, isolated from other Nautilus it is known as one of the few closed populations with no export of individuals and no recruitment from other sources.

During our time out at Osprey Reef we were involved in collecting samples of the species for a scientific research team back on the mainland.

Living in the dark cool depths of the vertical reef walls the Nautilus rise to more accessible levels on a night to feed. By lowering a lobster trap filled with rotting chicken carcasses to around 200m the crew were able to collect a number of the animals for the study.

Before packing them safely into a specialised container they were released at a more accessible depth of 30m for the guests of the boat to view underwater.

An incredibly rare opportunity for a scuba diver as Nautilus sightings are usually reserved for those with a more adventurous nature who dare to venture past the limits of recreational scuba diving.

Creatures of the deep

My mind races as I clip myself into my gear. I’ve been buddied with Pablo an Argentinian diver with an unbelievable skill for conserving the air in his tank.

This guy is a machine.

I would say I was a relatively competent diver and can last about 60 to 75 minutes on one tank depending on the depths to which I dive. Pablo always had at least 30 bar more than me on surfacing and I was terrified my anxiety would cause me to suck through my tank in ten minutes flat.

I can hear other divers around me vocalising their trepidation. Talk turns to the size of the sharks and the likely hood they’ll attack.

‘They’ll be much more interested in the tuna heads, just don’t make any sudden movements,’ reassures the trip director.

I perform my buddy check, spit in my mask and ready myself.

This is it. I am about to dive with sharks without the aid of a metal cage!

As I wait for Pablo by the anchor line I muster the courage to look down into the inky blue beneath me. We’re right at the edge of the reef and I’m floating over a deep abyss. As more and more divers enter the water my anxiety turns to adrenaline as I watch them disappearing below the surface.

Pablo is calling me over to where he is floating with some of his Argentinian comrades and together we descend. With adrenaline coursing through my veins it takes me a moment to regulate my breathing and by the time I’ve managed to calm my nerves we’ve arrived at the coral amphitheatre.

The northern most point of the reef, North Horn is exposed to the surrounding Coral Sea and provides the perfect environment to meet pelagic creatures from the deep.

While the reef begins just 5m from the surface it slopes down to 40m before dropping vertically to around 400m. The location, currents and isolation all combine to make diving North Horn a unique experience.

A mind blowing spectacle of theatre and adrenaline there’s no doubt that the shark feed dive is a bucket list activity not to be missed. Perched on a ledge of coral you watch as a steel trash can is lowered into position from the surface. Attached to a small outcrop on the very edge of the reef the can contains tuna heads attached to a metal chain.

As soon as the can enters the water the sharks begin to swim rapidly in circles, occasionally they bash into it aggressively in an attempt to release the bait. They know the score, this is an easy meal.

A frenzy ensues as their tension reaches fever pitch.

Watching as the action unfolds I am mesmerized by the beauty of these misunderstood creatures. Their bodies of pure muscle elegantly slice through the water. Swimming within arm’s reach they scrutinise each diver but remain at a distance, unsure of the constant stream of bubbles omitted from our regulators.

The trip director releases the bait and the sharks swirl around the chain like water escaping down the plug hole. Their bodies entwined as they savagely tear anything they can sink their teeth into. Again I am awestruck. My previous feelings of anxiety have left the pit of my stomach and I am lost in the scene unfolding before me.

No nature documentary, oceanic photography or National Geographic editorial has ever provided me with such an intimate view of life on our earth. White and silver tip reef sharks flurry to find a piece of the bait and a greedy but rather impressive potato cod pops out of the depths to try and get in on the action.

Perched on the coral wall I forget to take photographs, I forget to blink and, as I discovered when I surfaced from the dive with a record amount of air remaining in my tank, I forget to breathe.

As the last of the bait is consumed the sharks retreat into the inky blue and we head off to explore the surrounding reef. The site covers a large area of ‘drop off’ where the coral wall descends to unimaginable depths and it is easy to find yourself pushing the limits of recreational diving.

As we drift along with the current it becomes increasingly important to keep an eye on our depth, air consumption and distance from the boat. While it’s all too easy to lose yourself in the beauty of the soft corals, fans and macro life that blankets the wall, safe diving practices dictate you keep your wits about you.

With our tanks half empty we turn and make our way slowly towards the shallows where we find schools of brightly coloured fish, sea stars, lion fish and octopus hiding out in the maze of coral.

Getting a dive buzz

Hovering beneath the boat I catch sight of Ben on the deco bar, I can tell he’s still buzzing from the dive. We complete our safety stop and surface to cheers and whoops from the other guests. Clearly everyone enjoyed the shark feed experience and came back to the boat in one piece!

I must just include this snap I took of Ben as we explored the depths of the coral wall that lined the dive site.

In my eagerness to both communicate that there was a large shark behind him and capture the moment on film, I’m afraid I managed neither and instead snapped a rather confused Ben with the shark disappearing into the blue!

Have you a desire to see these magnificent creatures up close? Share your scuba stories with us below.