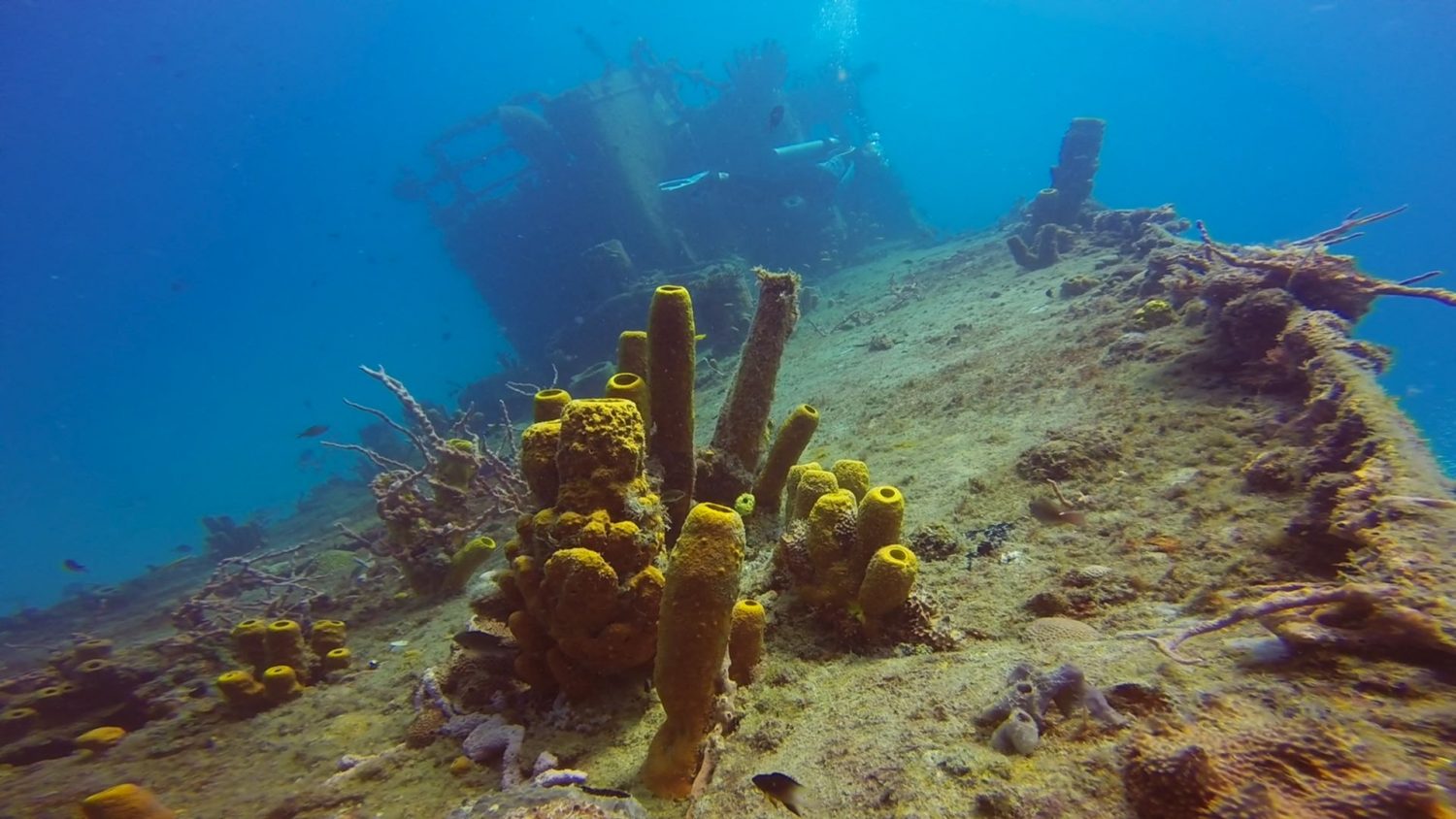 A charming natural harbour, Barbados’ Carlisle Bay is fringed by a crescent swathe of sand that lures a multitude of holiday makers to the south coast each year. Leaving their hotel rooms and rental apartments they flock to this pristine expanse of beach that sits aside the country’s capital, Bridgetown.

While for many it’s the Bajan rum punch (which flows far too freely at establishments such as the Copacabana Beach Bar), and the soft white sand that draws them to this stretch of the island’s coastline, adventurous travellers are enticed by the promise of a far more unique experience: scuba diving on the five storied shipwrecks that lay at the bottom of the bay.

Craving adventure in the underwater world? Check out our dive video below ↓

Thanks to the relatively shallow depths at which these vessels now sit, the wreck sites in Carlisle Bay are accessible to divers of all abilities. Scuba nuts will also be thrilled to hear that a number of local dive operators run daily trips out into the bay, so it’s easy to get ‘wrecked’ at least once during your stay on the island.

Having spent the last few months dipping in and out of the bay myself, I thought I’d share with you my pick of Barbados best wreck dives, as well as a little insight into the ships and their varied histories. 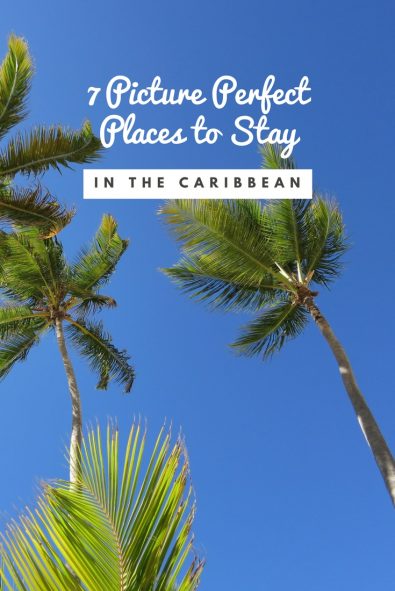 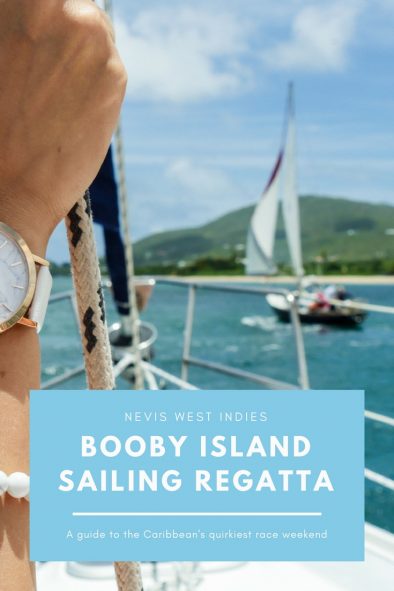 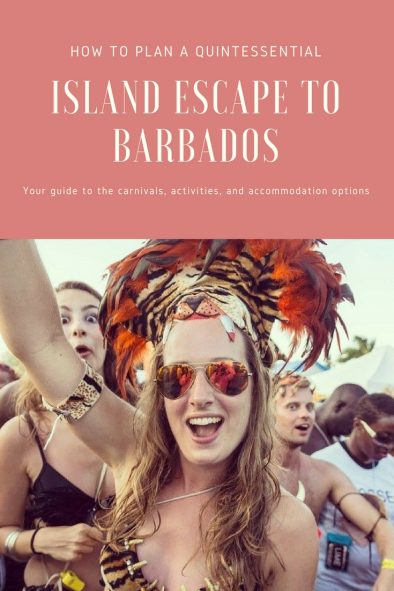 THE WRECK OF THE BERWYN 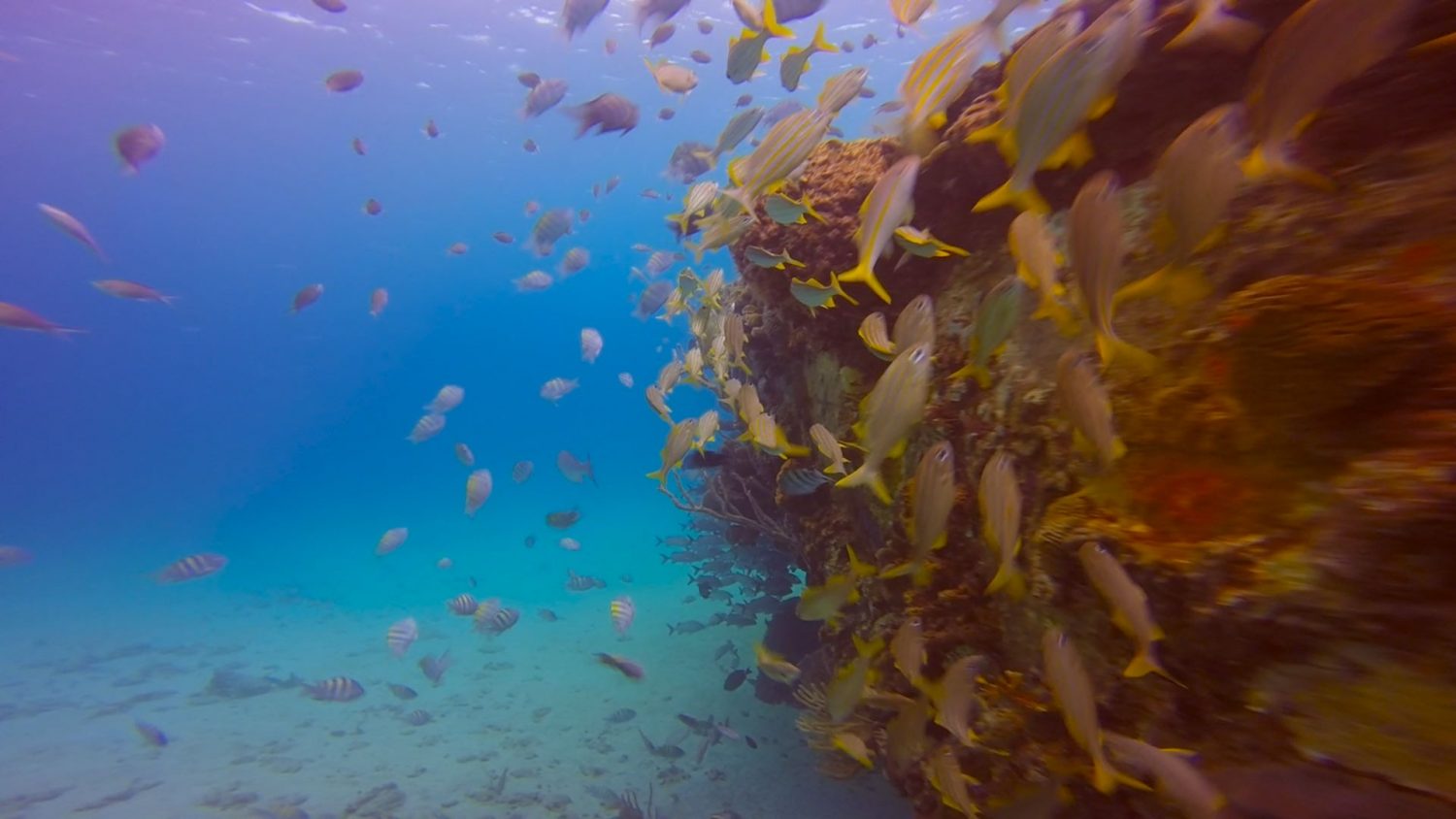 Location: After just a short boat ride from the shore, or a relaxed seven minute swim for keen snorkellers (swim out from the section of beach opposite the band stand on Bay Street), you’ll find yourself descending onto the wreck of the 70ft Berwyn.

Deliberately sunk in 1919 by a mutinous crew rebelling against their captain’s decision to leave Barbados, the vessel is now completely enveloped by almost 100 years of growth and has become a heaven for marine life. Swim along the starboard side of the boat and peer into the hull where you’ll see a veritable spaghetti junction of schooling fish darting about within the structure.

THE WRECK OF THE BAJAN QUEEN 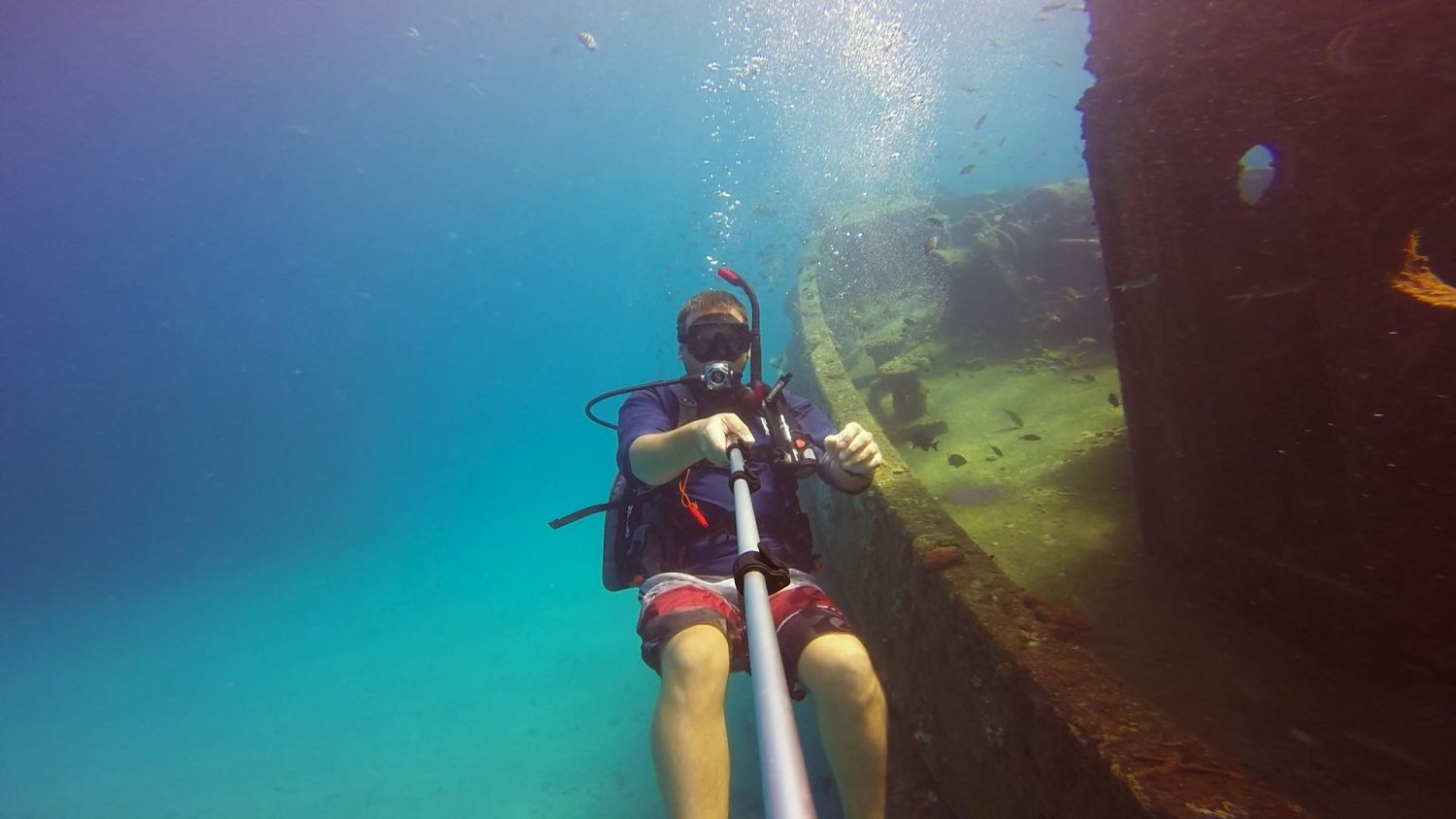 Location: Swim straight off the stern of the Berwyn and the shadow of the Bajan Queen will appear.

Reincarnated a number of times since her deployment as Barbados’ first tug boat, the 120ft Bajan Queen finally came to rest in 2002 after serving as a ‘party boat’ sailing the waters of the bay with thousands of Barbadians and visitors stepping on board throughout her years in service.

Explore the deck (you can still see the wash rooms with all the porcelain in place), descend into the hold, and swim through the Captain’s bridge.

THE WRECK OF THE ELLION 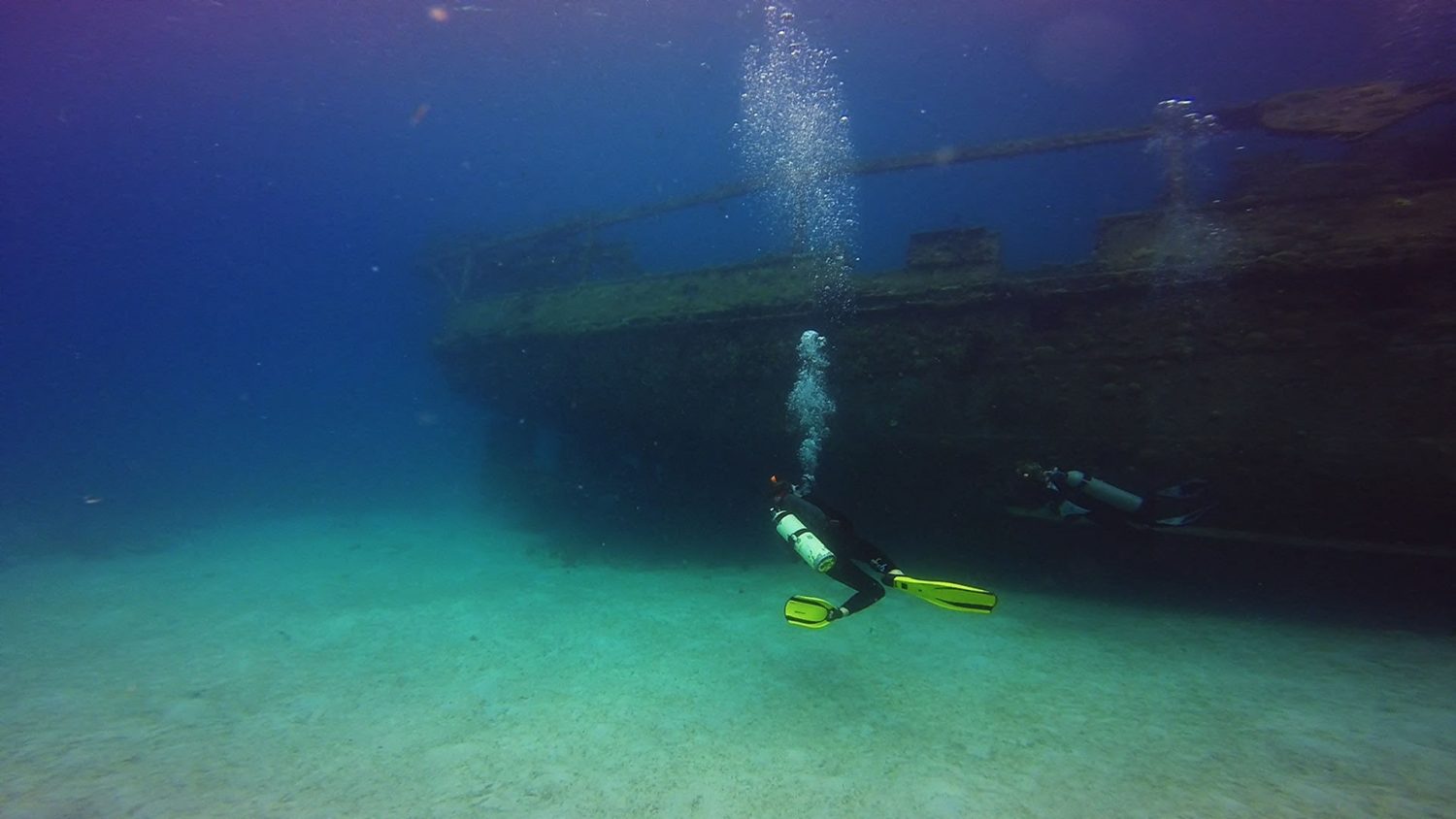 Location: Swim due north from the bow of the Bajan Queen and the wreck of the Ellion will soon fill your field of view.

The bad egg of the bunch, the 110ft Ellion (originally from Colombia), was seized by Barbadian authorities after it was discovered that she had entered Barbadian waters stuffed to the gills with contraband. Left to rack and ruin she was docked in Bridgetown Harbour for a number of years until her sinking in 1996.

Confident divers can descend into the large hold of the Ellion and navigate through the bowels of the ship. Pass through the engine room and climb the spiral staircase that leads out onto the deck.

THE WRECK OF THE CE TREK

Location: Off the port bow of the Ellion you’ll find the CE Trek.

The most humdrum structure within Carlisle Bay this hunk-a-junk boat made of metal and cement is akin to an artificial reef. Soft and hard corals grow in abundance

THE WRECK OF THE CORNWALLIS 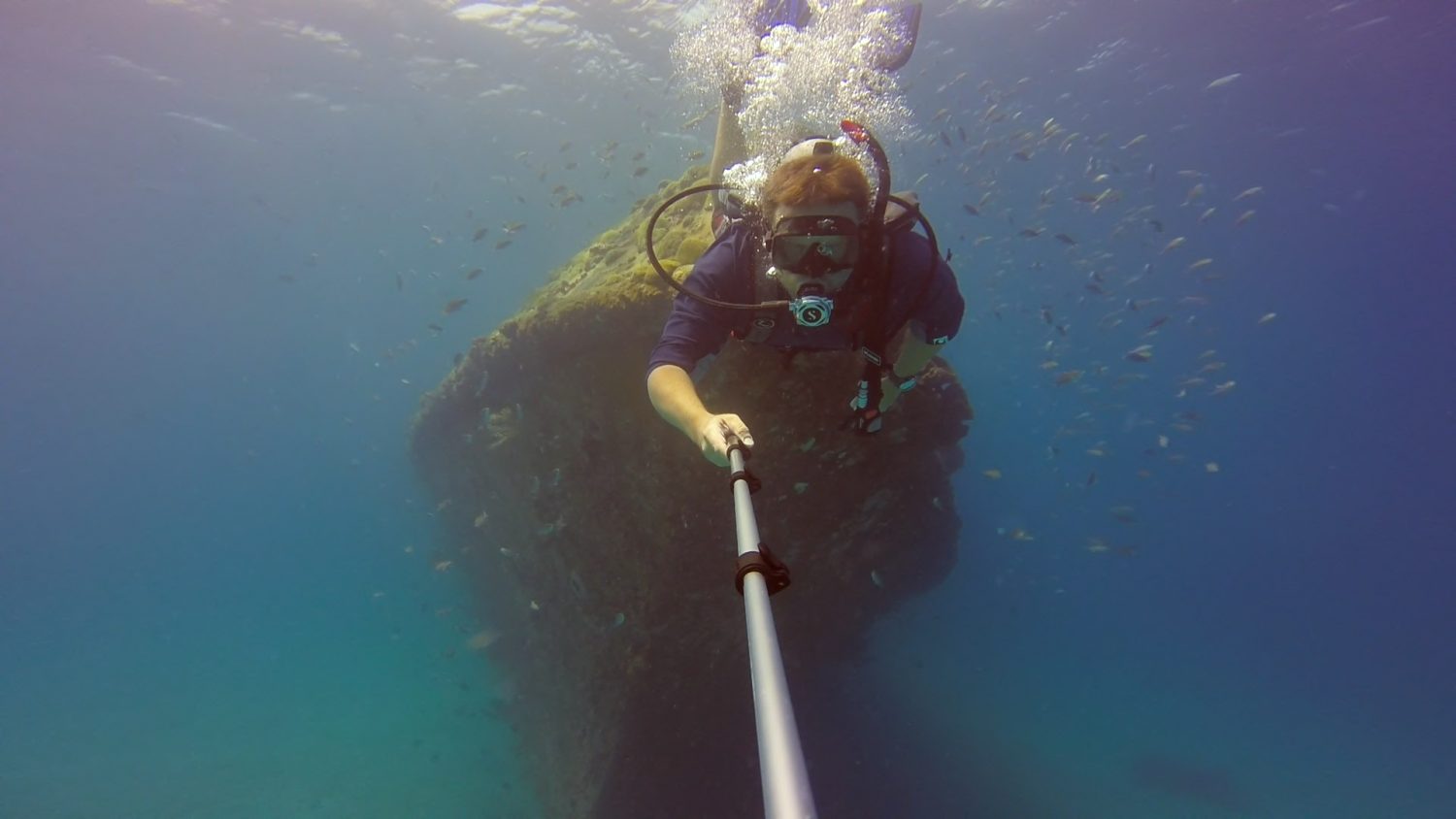 Location: Off the starboard bow of the Bajan Queen the ill-fated Cornwallis sits alone.

Twice the victim of a German U-Boat torpedo during World War II (she was actually taken ashore and repaired after the first only to be targeted again by the same boat), the Cornwallis came to rest further off-shore and was later relocated to Carlisle Bay during the completion of the marine park.

As you navigate from one wreck to another its likely you’ll meet a stingray or two, and sometimes a friendly turtle will tag along for the ride.

Forgotten debris from generations of shipping lay strewn across the seabed: anchors, canons, concrete blocks, and sections of reef blanket the sand. I even caught sight of two curious sea slugs making their way towards a wreck; a mass of what at first looked like seaweed their shaggy forms swayed to and fro with the tide.

While the crystal waters of the bay attract swimmers and snorkellers to the surface, I hope my account of the dives I experienced beneath the waves will inspire you to venture a little deeper during your stay.

All photos in this article were taken with our GoPro.

INSPIRED? PIN THESE TO YOUR TRAVEL PINTREST BOARDS ↓ 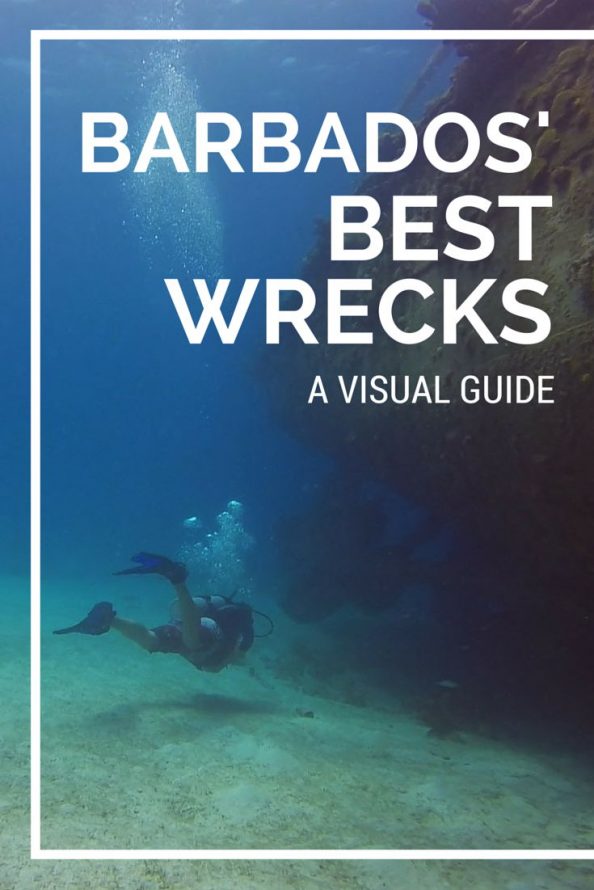 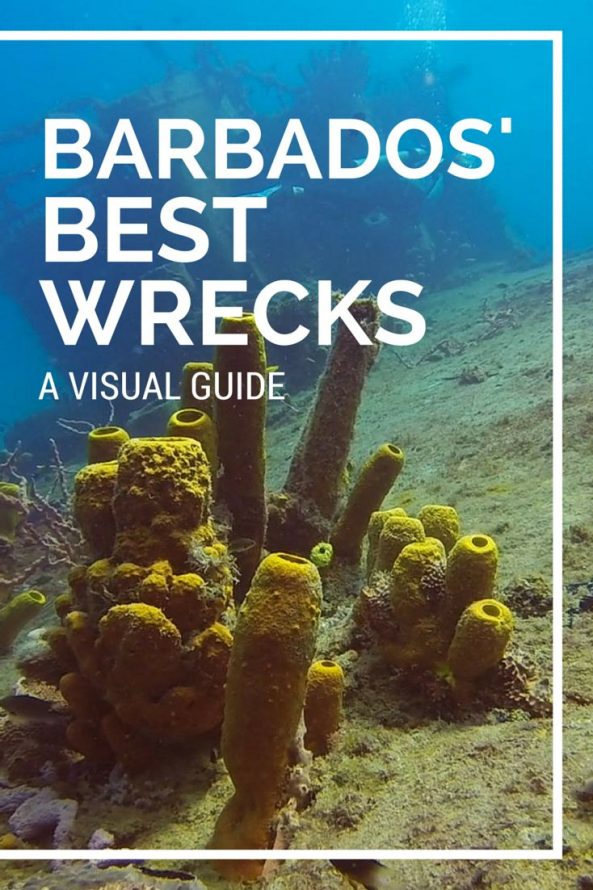 Have we convinced you to try some wreckreational diving on Barbados?