Sailing From Darwin To Gove Across The Arafura Sea 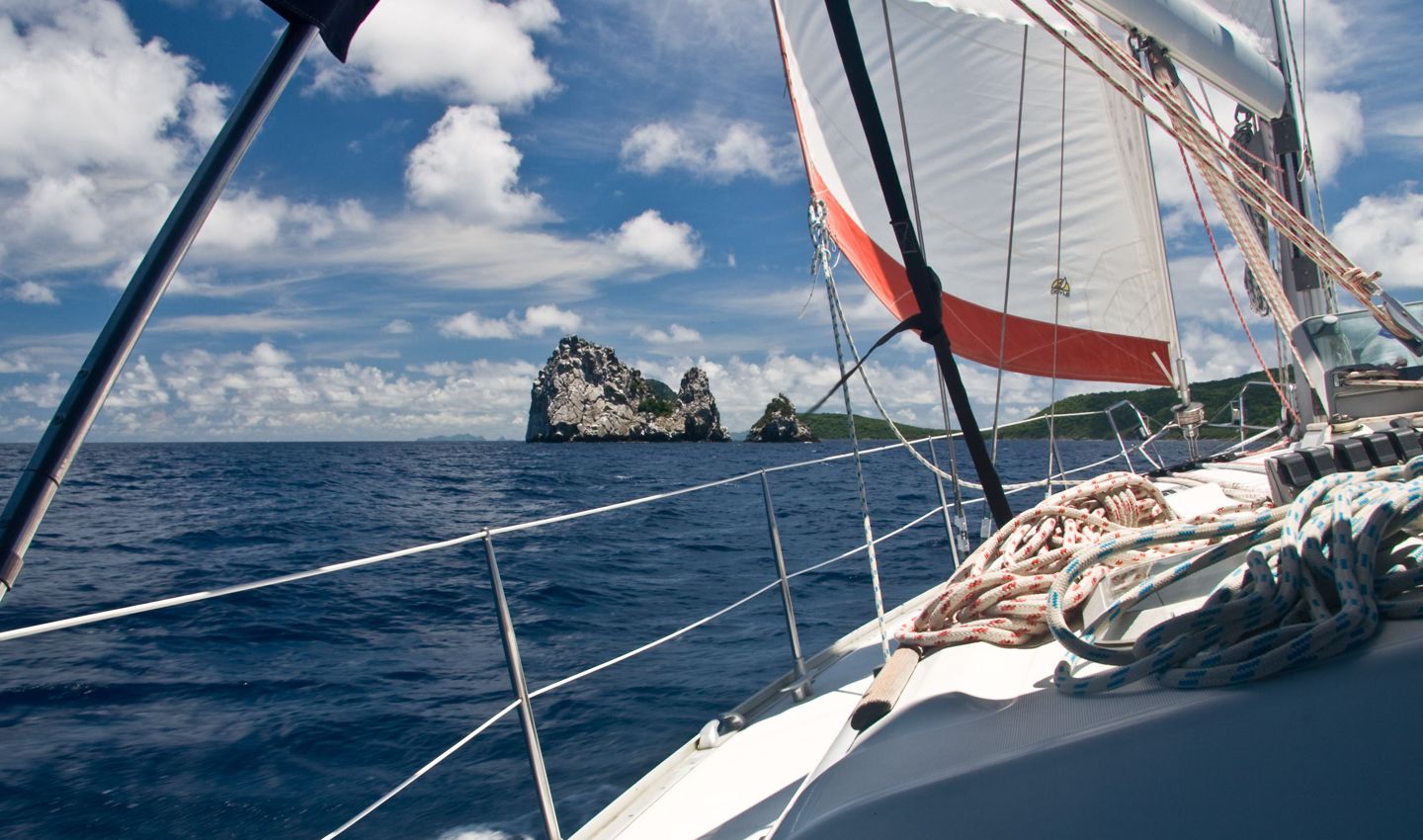 Sat in our Winnebago at a camp site in Mission Beach we debated our options.

Ben had just returned from the tourist information centre with his body weight in leaflets and brochures. The colourful pages detailed every available dive trip out onto the Great Barrier Reef. We’d been dreaming of diving the reef since qualifying as PADI Divemasters in Costa Rica a little over two years ago, and now the moment was finally upon us.

While the diverse marine environment was very appealing the price tag accompanying many of the more extensive trips was not. As I flicked through each brochure desperate to find a viable option Ben searched online for deals and discounts.

Never one to pay the recommended retail price for anything, he was determined to find us a scuba travel hack and reduce our costs.

The Queensland sun was streaming in the window and the heat was starting to send me into a hazy dream. Suddenly Ben looked up from his laptop.

‘You’ve got to come and read this,’ he said.

SAILING ACROSS THE TOP OF AUSTRALIA 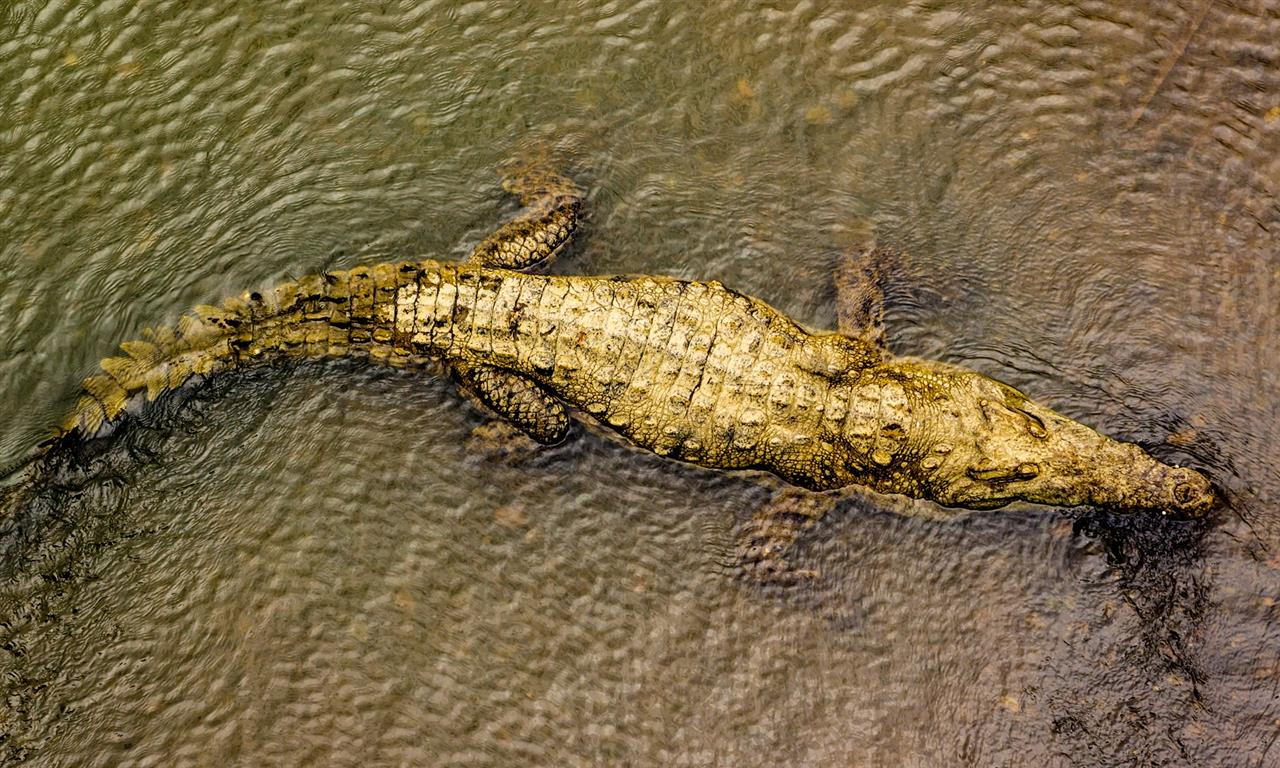 I have always thought of the Northern Territory as a remote wilderness, reserved for those who are willing to get back to basics, camp out under the stars and wrestle crocodiles.

Ok, perhaps you can enjoy a quintessential Northern Territory experience without wrestling a crocodile.

Home to Kakadu National Park and the famous Adelaide River a visit to this wild, untamed environment is an attractive addition to any Australian itinerary. With over 1,349,129 km2 of predominantly unpopulated countryside to explore, there’s plenty of opportunity to go ‘Walkabout’.

Now I know you’re wondering what the outback of the Northern Territory has to do with scuba diving on the Great Barrier Reef, and I must tell you, the answer is nothing.

Just three days after our Great Barrier Reef brochure brain storming session we were boarding a flight to Darwin.

During his scuba travel hack search Ben had found an advert on Gumtree detailing the opportunity to join the crew of a yacht sailing from Darwin, across the top of Australia, round Cape York to Cairns. Within the proposed itinerary was a week of scuba diving on the Great Barrier Reef. The opportunity sounded ideal and after chatting with the skipper we were offered the job.

The following day we drove to Cairns and found a storage facility for Winifred, our beloved Winnebago. We booked our flights, packed our bags and at one point I even let out girlish shrieks of excitement.

One of our responsibilities as crew was to provision adequate supplies for the duration of the trip. The coastline of northern Australia is largely uninhabited and consequently there is little opportunity to refuel and restock.

As the plane left the runway we settled into our two and half hour flight and began planning a menu.

PROVISIONING FOR AN ADVENTURE AT SEA 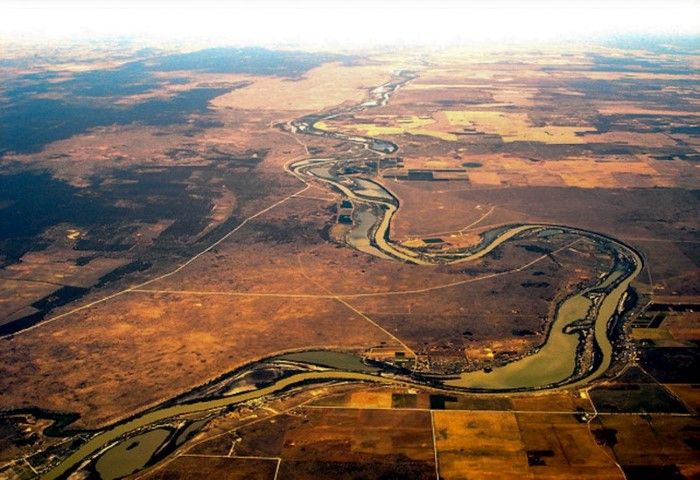 Other than when preparing to cross the Nullarbor Plain we’d never had to concern ourselves with stocking up on supplies, and attempting to calculate portion sizes was proving to be quite a challenge. Breaking down the ingredients of each meal I eat into portion size and weight is not something I regularly attempt.

Flying seven thousand feet above the Australian outback we discussed the weight of pasta and dates and calculated the number of meat slices we would allocate to each sandwich. We even entered into a rather disconcerting discussion with the woman sitting next to us about the average number of sheets of toilet paper a healthy person used per day.

We thought the hard work was out of the way, little did we know the next few days would comprise of an unsavoury number of hours perusing the aisles of the local supermarket. 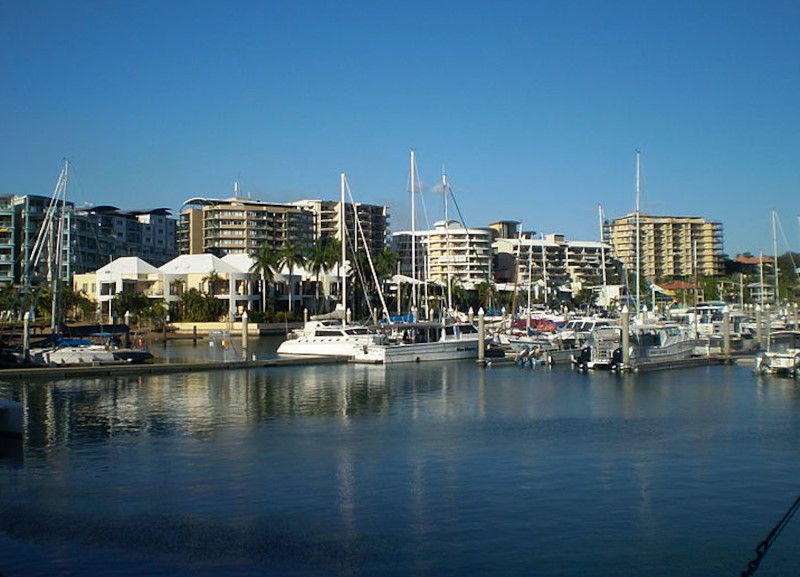 With the galley stocked to the brim and our sea legs firmly attached we motored through Cullen Bay Marina towards the lock that would take us out into Port Darwin and the Beagle Gulf.

Making our way north east we navigated the gap in between the Vernon Islands and Melville Island before sailing through the Van Dieman Gulf and out onto the Arafura Sea.

With little wind forecast we set the main sail and continued to motor towards Port Essington on the Cobourg Peninsula. The site of an early British settlement set up to facilitate trade with Asia, it would provide us with a safe mooring for our first night at sea.

After a calm night we set sail for South Goulburn Island. Home to a traditional community of the Warruwi people it is cut off from modern civilization. Choosing to live a very primitive existence, just as their ancestors did on the mainland only a few hundred years ago, they do not welcome uninvited intrusion and permits from the Northern Land Council are essential for all visitors.

Making the most of a favourable shift in the wind we continued into the night to reach the safety of the island’s shores. As we anchored in the shallow water fires were visible on the island and we heard loud cries from deep within the darkness.

It gave me the heebie jeebies and I struggled to get to sleep. 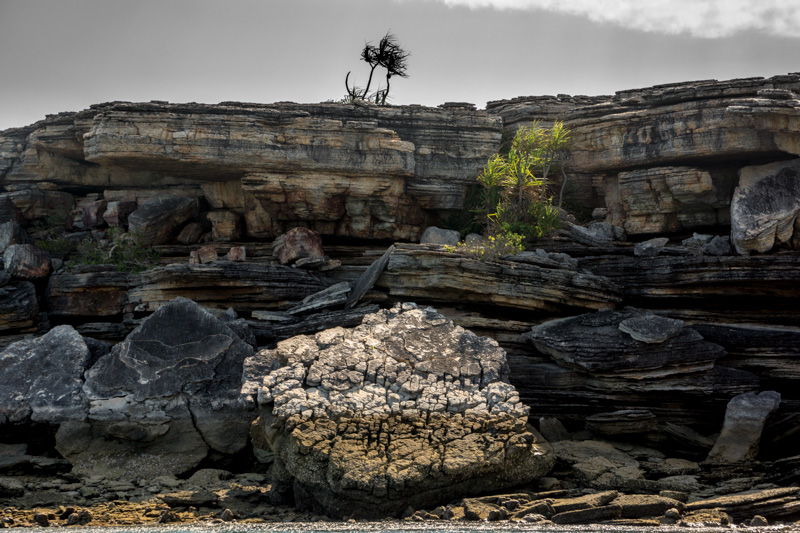 We survived the night without intrusion from the neighbouring tribe and as we motored out of the shallows a pod of dolphins appeared and spent thirty minutes playing in the bow waves.

Further sightings of dolphins accompanied by turtles and large schools of flying fish throughout the day inspire Ben to cast a line from the back of the boat. Almost immediately he reeled in an enormous fish of unknown species.

Quite a catch for a rookie fisherman.

The following day brings the beginning of the next leg of our crossing.

Our chosen course meant no visible land for at least the next twenty four hours. While the prospect of being adrift in the open ocean was a little daunting we were excited to witness a 360 degree oceanic horizon.

As the wind picked up the ocean swell rose, and the night enveloped the skyline.

With our only frame of reference eaten up in the inky darkness we were relying solely on the high tech navigation equipment on board. Taking over from the skipper at 1am it took my night vision a little while to kick in and I was momentarily blind in the dark.

Alone on the deck I strained my eyes for a view of the horizon. My mind began to play tricks on me, I became convinced there were other vessels on a potential collision course even though the radar was quiet.

At one point a wave crashed over the bow and my over active imagination persuaded me there was a whale in the water beside me. While the light of the moon bouncing off the waves the light level was extremely minimal and I began to imagine the scene below the waves.

Thoughts of dolphins, whales and sharks crossed my mind and I allowed myself to contemplate how it would feel to sink into the depths below.

With land in sight and our night watch a distant memory we sailed towards the south side of Echo Island.

Mooring in the shallow bay the skipper called us to the galley to discuss our next challenge, ‘The Hole In The Wall’. 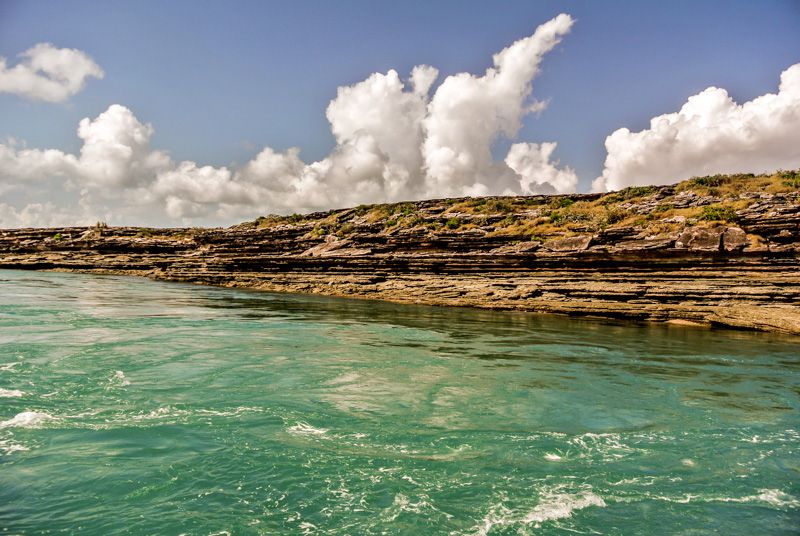 The Gugari Rip or ‘Hole in the Wall’ as it is more commonly known, is a narrow channel between Gulguwuru and Raragala, two islands in the Wessel Island group.

While the rip is notoriously difficult to navigate it is the most direct route through the island chain and on towards the mining town of Gove. To successfully traverse the rip we had to time our entry with the receding tide, this would ensure we could retain control of the yacht against the powerful force of the water rushing in between the islands.

As we reached the rip it became obvious that an attempt would be dangerous. Mooring in the next bay we waited for the ebb tide. As the current subsided we made our way back to the entrance and began the nail biting process of navigating the rip.

Stood by the mast I was given the responsibility of alerting the captain to hazards and patches of current visible at the surface. Terrified that I would be responsible for the sinking of the yacht I focused my attention on the water in front of me. Lead by my description of the hazards both port and starboard, and Ben’s vigilant monitoring of the depth, the skipper brought us safely through the rip.

Having found our way through the rip we anchored in the shelter of a bay on the shores of Wigram Island. A bright and early start saw us make it to the port of Gove in the early afternoon of our seventh day at sea.

Safely moored in the port of Gove we were called to the galley by the skipper. Our journey must end here. He’s received news that will force him to postpone the next leg of the journey and he is to fly home in a few days time.

Our dreams of diving the Great Barrier Reef were once again suspended.

As we loaded our backpacks into the tender I couldn’t help but feel disappointed. The week aboard the yacht provided a unique voyage the like of which not many adventurers have experienced.

The remote coast of Australia’s northern territory had captured our hearts. Although rugged and wild its beauty suppressed any notions of fear and the open ocean inspired reflection rather than trepidation.

Have you ever traversed the remote wilderness of Australia’s Northern Territory? Share your tales of adventure with us in the comments below.