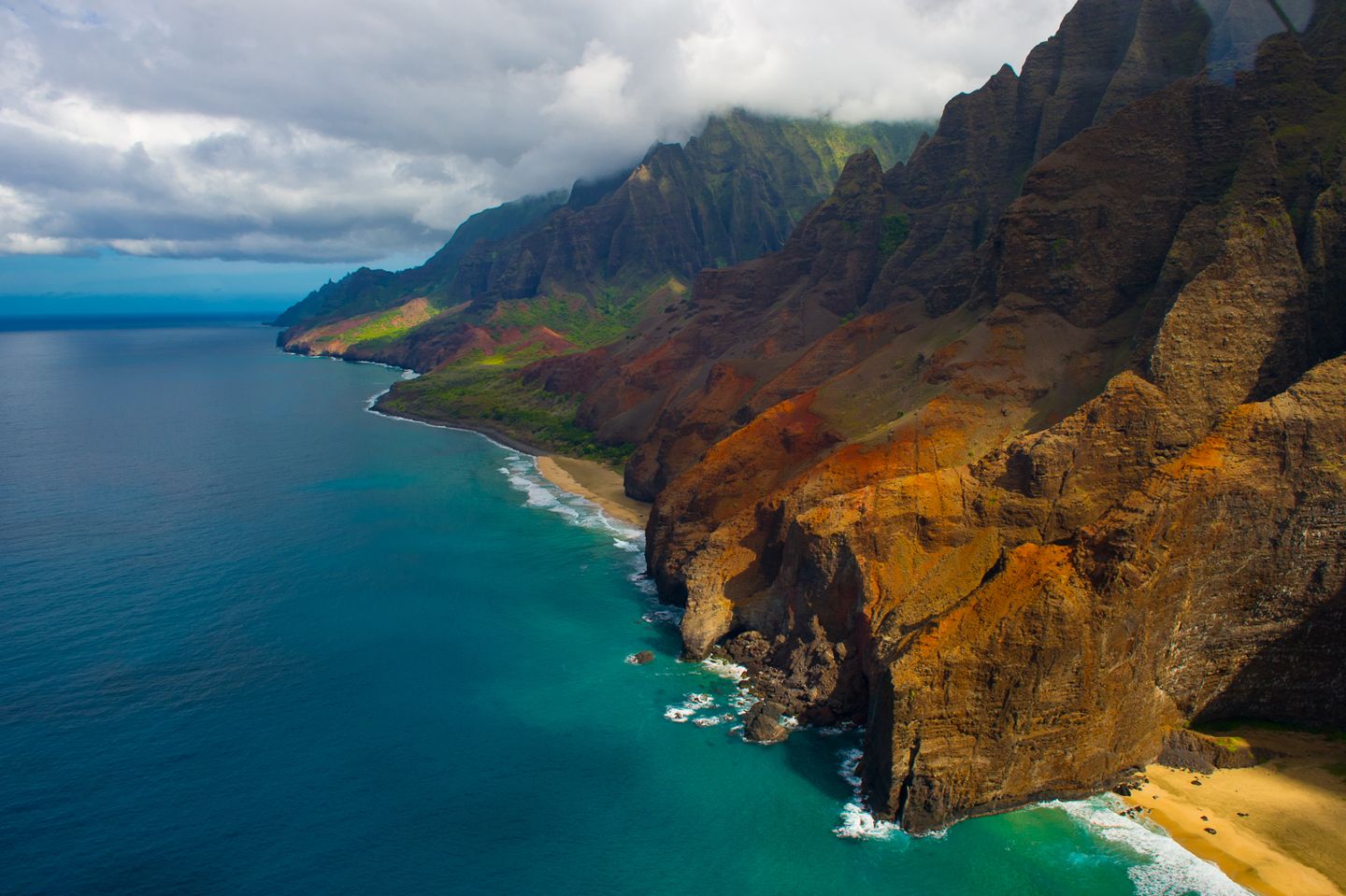 I’m motionless all but for the rhythmic kicking of my fins, left and then right. Levitating in a sea of blue my gaze is transfixed ahead.

Three Hawaiian Sea Turtles fill my field of vision, the colouring of their shells camouflaging their form against the coral below. Flying gracefully through the water they appear unaware of my presence, their paddle like forearms propelling them forward with ease.

As I dive down to take a closer look the vast sea cliffs of Na Pali disappear from view and I’m submersed in a world of aquamarine. Rays of sunlight pierce the waterline and light up the foreground.

Although famed for its lush interior Hawaii’s Garden Island offers some of the most scenic panoramas in the archipelago. Miles of sea cliffs tower above the waves, their form unique but strangely familiar.

Boarded by a landscape of lush rainforest and deep valleys that extend out to the coast, the Na Pali Coast State Wilderness Park has provided the backdrop to some of Hollywood’s most adventurous storylines.

Impenetrable to most who visit but for a tour via air, on foot or by sea, this region of Kauai has nurtured the imagination of children across the globe. King Kong, Jurassic Park, South Pacific, and Raiders of the Lost Ark were all filmed with the assistance of this breath taking stretch of coast.

Kauai’s Na Pali Coast Inspires Adventure. An environment in a constant state of flux, Hawaiian legends tell of the goddess Pele and her sister Namakaokaha’I who fought each other for the right to claim Na Pali their home. Their battle lives on in the erosive forces that continue to sculpt the shoreline today.

Snorkelling on the Na Pali coast

I’m in a meditative state with my face pointing towards the sea bed, sipping air through my snorkel my gaze is transfixed on the turtles.

A heaven for the species that call the region home, Miloli Bay is calm. To my left a small beach fringes towering rock pillars that appear to reach towards the sky like fingers, and to my left a vast expanse of ocean.

One of only three methods by which adventurous travellers can explore the Na Pali coast, HoloHolo Charters’ Snorkel and Sail excursion boasts the opportunity to interact with some of the island’s most famed residents.

A 5 hour experience exploring the Na Pali coast I would highly recommend the tour to anyone wishing to soak in the sights of the real Kauai. Sailing north from Port Allen along the west coast of Kauai the sheer magnitude of the cliffs hits you square on.

Thanks to the rugged grandeur of the deep, narrow valleys that litter this area of the island the region remains largely off limits to visitors.

No roads wend their way to scenic lookouts, no hotels offer onsite stays and there’s certainly no mobile phone signal. It’s the perfect excuse to disconnect for someone like me who has internet capability fed to them intravenously whenever possible.

The northern stretch of this Jurassic inspired coast is home to the 11 mile Kalalau Trail, the only land access to this part of the island.

Although each year half a million or so visitors head out to explore the Na Pali Coast State Wilderness Park, a very small percentage attempt to complete the trail. A challenging route that combines steep drop offs, narrow paths and arduous switchbacks between the valley’s blanketed emerald interior and the cliff edge.

The Na Pali coast is a haven for adventure

The product of an eruption born from the Emperor Volcanic Chain, the islands emerged from the depths forging new land. However there were weaknesses within the structure of the cooled magma and when Mother Nature saw fit, she re sculpted Kauai tearing away vast chunks of its landscape.

An unstable mass of igneous rock littered with patches or red iron oxide, Na Pali’s unique fluted cliffs and winding coastline are the result of a continuous attack from the elements.

A masterpiece of physical geography they’ve weathered thousands of years of running ground water polluted with botanical acids and ocean waves ripping sediments from the rock.

Back on the boat I sit on the deck sipping a glass of juice. Facing the shoreline I’m once again awed by the scene before me. The cliffs rise ever higher above the waves, sea caves appear in the rock face and sheets of white water fall into the sea.

Our captain, a very knowledgeable fellow, shares snippets of the island’s history and unique geology as we sail for Port Allen, and I’m lulled into a dream like haze as the boat bobs to and fro with the swell.

A guide to exploring the Na Pali coastline by boat

Standing alone against the might of the Pacific Ocean the Hawaiian Islands are the most isolated archipelago in the world. If I’m inspiring you to down tools and book an escape to explore Kauai’s Na Pali Coast, here’s what you need to know;

HoloHolo Charters operate a large catamaran to charter guest along the coast. They offer an exceptional service and provide snacks, beverages (including beer), and a pupus (a light lunch) through the day.

HoloHolo offer several types of tour to soak in the Na Pali Coast. You can choose a 7 hour Niihau and Na Pali supertour, a 5 hour Na Pali sail, or a 3.5 hour Na Pali sunset cruise. We opted for the 5 hour excursion and found it to be a perfect amount of time to be out on the water.

The boat goes very fast for one its size – up to 27 miles per hour – which means that we saw a huge amount of the coast. A real bonus in my mind. Just be aware that for the first 60 minutes or so – until you arrive at the start of the Na Pali region – walking around on deck, going to the toilet etc is a little challenging for those with weak sea legs.

We were fortunate enough to see some of Hawaii’s native Spinner Dolphins, this is not uncommon year round but January through March you may also see Humpback Whales.

Pack water resistant sunscreen, your swimmers, a towel, a hat and if the forecast suggests a waterproof jacket.

Have you explored Kauai’s Na Pali Coast State Park? Share your comments with us below.