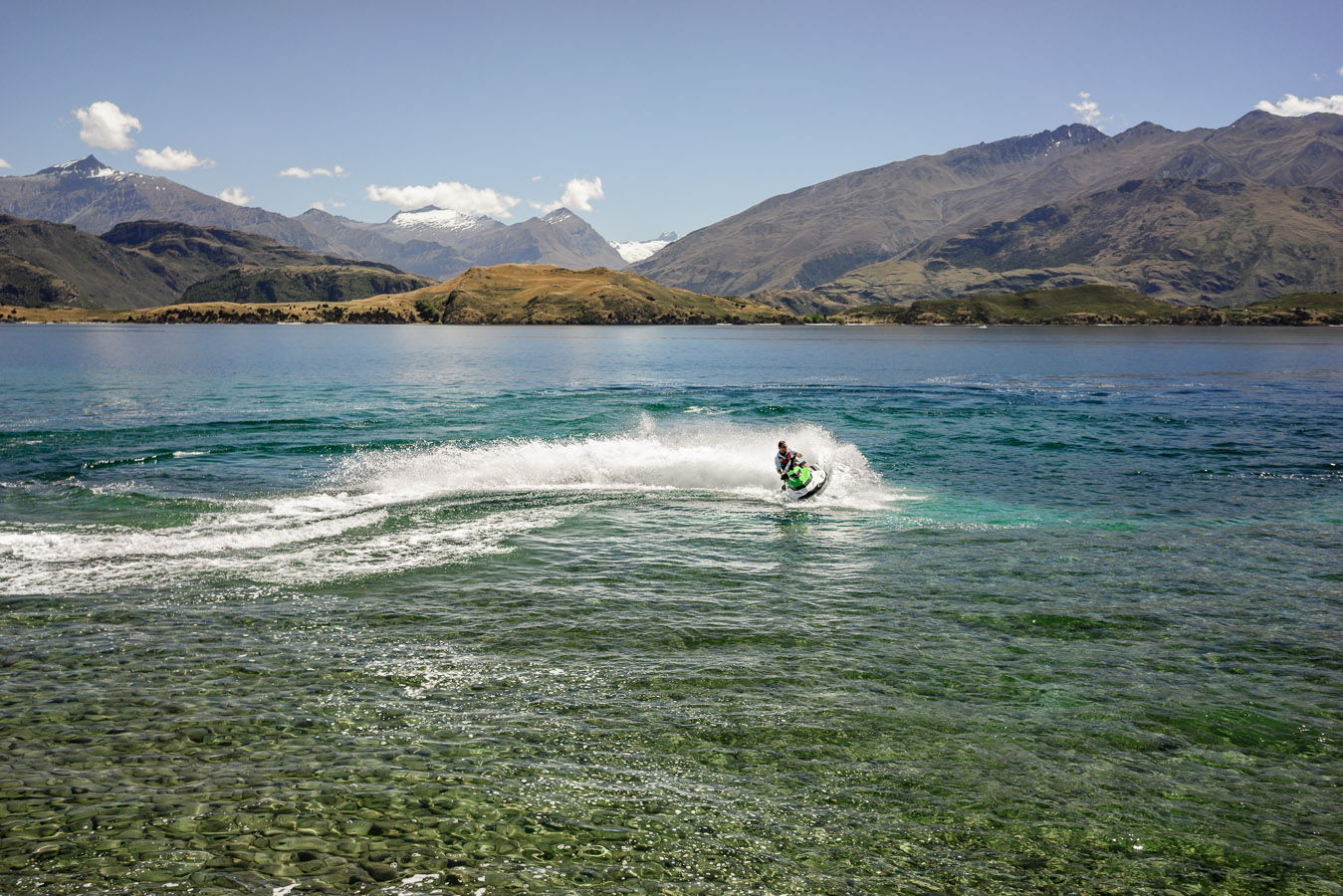 Surrounded by mountainous terrain that reaches down into the depths of its deep glacial waters, Lake Hawea is the smallest and most northerly of New Zealand’s southern alpine lakes.

Fed by the Hunter River the lake is dam controlled to the south by a vast terminal moraine; all that remains of the archaic glacier that carved out the flooded valley now engulfed by the waters of the lake.

Separated from neighbouring Lake Wanaka by a narrow isthmus at the most westerly edge, it has managed to conceal itself from the itinerary of visitors who choose instead to visit the neighbouring lifestyle reserve of Wanaka before driving past Hawea on their way to the wild West Coast.

Its name originates from a Maori sub-tribe that once lived in the area and in my mind Lake Hawea evokes a connection with the heritage of the south. As soon as I saw its deep cobalt waters I could feel its history pulsating through me, encouraging me to move to the beat of its drum.

High speed rarely appeals to my sense of adventure. I’d rather amble along at a sedate pace soaking in the view than fly by in a split second. However when exploring a glacial lake that stretches 35km into a mountainous nirvana, speed is a necessity that allows exploration with ease.

Although we thoroughly enjoyed our kayak excursion on Lake Wanaka, our time constraints meant that we just couldn’t see the best of Lake Hawea without the help of a motorised craft. Still hankering for the connection with the surrounding marine scape that paddle power offers, we opted to rent a jet ski from Torque Marine.

Arriving at the southern edge of Lake Hawea just as the sun was creeping above the surrounding peaks we set the Jet Ski in the water, wriggled into wetsuits and life jackets, and set off from the jetty.

Still clad in winter snow the surrounding peaks loomed large on the horizon. No cloud had blanketed the earth during the small hours of the morning and the air hung thick, freezing my eyes and face as we powered across the water.

Riding out to Silver Island

Tears streaming down my face from the cold I hugged Ben tightly as we flew north towards the remote western arm of the lake. I was humbled, that’s really the only way to describe just how insignificant I felt against the scale of the surrounding landscape, a tiny dot on the vast surface of the lake.

Suddenly the warmth of the sun struck my face and Ben slowed down to photograph the scene ahead.

Leaving the main body of the lake behind we navigated west and followed the arm of the lake north to Silver Island. A rocky outcrop within a vast bay the island was draped in lush palms, ferns and trees reaching skyward. We circled its entirety, looking down into the shallows, green and aquamarine tones rippling in our wake.

Flying further up the western arm of the lake I began to feel as though I was privy to a hidden secret, that I was perhaps the first person to cast my eyes over the surrounding scene. The sun was beginning to breathe life back into my limbs, no longer was I conscious of the freezing air against my face.

On each side towering peaks loomed large, summits of snow and jagged rock. Running along the lake edge a carpet of green extended back towards the lower reaches of the mountains and the occasional landslip brought earthen tones to the otherwise emerald expanse.

As we powered farther into the wilderness it became apparent that we were the only people on the lake that morning. We’d not seen another soul.

Petrified branches of archaic trees began to appear from the depths. Slowing down to take in their alien forms I leant over the side to assess the depth but the water swallowed the light long before it could reach the roots of the submerged giants.

For how long they’d been underwater I don’t know.

Their flooded forms reached up from the depths with such an ethereal beauty that I began to feel as though we were encroaching on a sacred land. A landscape this beautiful must have had a significant place in the heritage of the Maori tribes that once walked the shores and fished these waters.

The end of the line

Reaching the most northerly point of the lake the floor rose from the depths and soon we were floating above just a metre of water. Fallen trees lay decaying in the soft silt and a torrent of water rushed down the side of the neighbouring peak and into the lake.

Ahead the landscape was enveloped by more snow-capped peaks and emerald flats. Sheep peppered the foreground, their presence other than that of birds, the only life we’d seen so far. We spent at least 30 minutes motoring through the shallows, soaking in the scene around us and relishing the fact that we had the entire western arm of the lake to ourselves.

When we finally managed to tear ourselves away we set off again, this time south, back towards civilization. Following the northern edge of the lake we came upon more submerged forests and even spotted a series of small fisherman’s huts set back into the tree lined shoreline.

The sheer scale of the lake was such that we spent much of the day exploring. Slowly weaving our way through the shallows and speeding at full throttle down the main body of water, a day of Jet Skiing on Lake Hawea is the perfect way to encompass rural exploration with high speed thrills.

I’ll always remember our adventures on Lake Hawea. Being far removed from civilization with the freedom to explore is in my mind, the formula for an epic adventure.

Have you seen the petrified trees of Lake Hawea’s western arm? Share your comments with me below.