Steampunk HQ | Get Punk’d In Oamaru 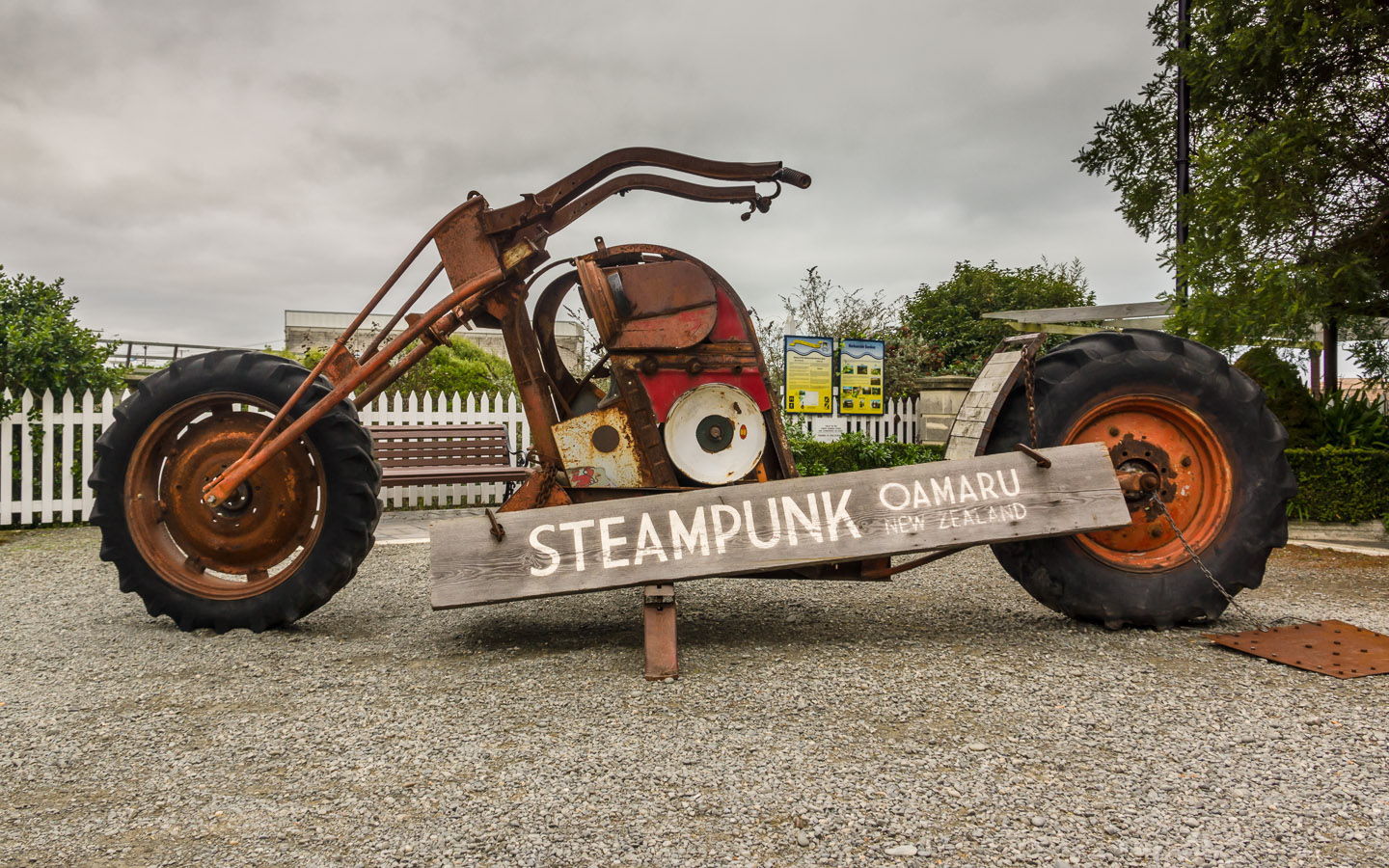 I heave open the door and peer into the darkness. A repetitive tick pierces the eerie silence, fitfully flickering lights and a heavy fog obscure my view. I lean in momentarily to shout ‘Hellooooo’.

I contemplate leaving the apparent safety of the well-lit entrance hall but there’s something drawing me further towards the darkness.

As my eyes adjust I can make out a series of shadows, a giant lever and various mechanised forms.

Walking back into the light the heavy door slams shut and the ticking is no longer audible.

‘Maybe there’s no one home?’ I suggest, half hoping perhaps I might escape our proposed visit to what appeared to be a blacksmith’s workshop on acid.

For all intents and purposes, if it’s a museum, with objects of interest, historical significance or biological fascination, then I’m game for a visit.

However, put said objects of interest in a dark room with what appear to be human skulls and Victorian medical implements, and I’ll politely decline and head straight for the gift shop.

Ben on the other hand is happy to explore whatever.

Like all males he is in his element when tinkering with things that he’s never seen.

Fortunately for him neither of us had ever heard of the Steampunk movement and on seeing the exterior of Steampunk HQ – A gargantuan silver airship and actual life size steam train juxtaposed against the ageing limestone museum – curiosity got the better of us and we found ourselves walking over for a closer look.

The age of steam vs punk

A subgenre of speculative fiction Steampunk is a world where the industrial revolution meets a post-apocalyptic civilization.

An alternative history where steam power regains a grip on the world.

In this cultural display of art, fashion and sculpture, one man’s trash is literally another’s treasure.

Steampunkers reconstitute the familiar into the weird and wonderful in a bid to create an alternate dimension.

Peculiar contraptions hiss and pop as they send you kicking and screaming into warp speed, destined for worlds far beyond our comprehension.

Mayan counters track the passing of time and predict the end of the world as we know it, subliminal messaging interrupts rational thought and radio waves bounce around your brain, feeding you messages from the other side.

The fashions incorporate fabric and object without prejudice.

Merging the line between form and function these alluring designs adorn the colourful characters who call the world of Steampunk home.

For many the neo Victorian world of Steampunk is a lifestyle choice, their culture and to some extent religion.

The freedom to subscribe to an alternate reality, one which anyone can create and transform, is enticing a growing number of followers across the globe.

If your curiosity allows I highly recommend taking a trip into this neo industrialised fantasy world.

As you explore the dimly lit curiosities of Steampunk HQ you are transported into another dimension.

One of unexplainable sights and sounds.

80’s computers emit puffs of smoke as they dial out to connect with the either, steam powered portals spring into life as they sync with alternate dimensions, the creative remnants of previous inhabitants litter the floor, light bulbs flicker and the sound of static fills the air.

A loud rhythmic ticking keeps the ensemble in time.

Out of this world displays

Sat in a Victorian dentistry chair, my feet nervously tapping the floor, the projector clicks over and the crumbling brick wall in front of me comes to life.

To my right the hull of a ship, skippered by a skeletal form, and to my left the entrance to a portal, destination unknown.

Walking over to the exit I push open the door and the sunlight hits me like a wall of warmth.

As my eyes readjust I take in the scale of the collection before me.

Despite my first impressions I’m glad I got punk’d in the sleepy Victorian town of Oamaru.

An anomaly amongst the traditions of the historic quarter Steampunk HQ offers residents and visitors a glimpse into an alternate reality.

A vision of how the steam revolution could have sculpted the human existence.

For their idiosyncrasies I believe the Steampunkers should be celebrated.

For creating their own version of reality with such enthusiasm and vigor, not simply by programming an online multiplayer game, but by designing, inventing, crafting, sculpting, weaving and stitching a new environment.

Believe me when I say virgin Steampunkers, this neo nutty world is like no other and definitely worth a trip…..whatever dimension you’re travelling from.

How to get steampunk’d

Steampunk HQ sits at the edge of the Historic Precinct in the sleepy town of Oamaru on New Zealand’s South Island.

While the precinct itself is definitely worth a visit – think original Victorian architecture, quaint tearooms, book shops, local crafts and whisky cellars, – if you’ve only an afternoon to spare I suggest walking through the main street and straight to Steampunk HQ.

Yes the precinct is lovely, yes the fudge shop does look tempting – OMG the fudge is so good – however a trip inside the WTF world of Steampunk is a rather more exhilarating experience.

Have you been Steampunk’d? Perhaps you’re a veteran punker? Share your comments with us below!